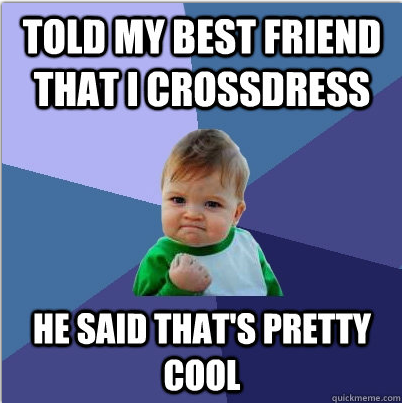 I can honestly say I didn’t. At six, I had just completed 2 years of kindergarten and starting first grade. I was so innocent, I didn’t even know what the differences between boys and girls were, other than that my best bud in kindergarten was this cute boy who sat in the seat next to mine. We used to chatter so much in class that we were regularly “punished” by having to stay behind after school. Of course, we just used our “punishment time” to chat more! LOL

But we are to believe that children as young as six today already know they’re transgender (aka gender dysphoria)! — that they really truly are the opposite sex trapped in the “wrong” body.

To top it off, some of those preternaturally precocious 6-year-old transgenders actually go to a cross-dressing summer camp — but boys only! Happily, feminists need not bristle. There’s always transgendered Girl Scouts!

Young boys preening in front of mirrors putting on makeup, picking flowers in skirts, and prancing in heels and dresses at a talent show: all these are depicted in controversial photoessay, featured on Slate this week, documenting an annual summer camp for gender confused boys. The images are drawing praise from gay activists, and criticisms from pro-family leaders.

For the last three years, photographer Lindsay Morris has attended the four-day-long camp for “gender variant” boys from 6 to 16 and their families held in an undisclosed location in New England.  Morris refers to the camp by the pseudonym “Camp ‘You Are You,’” although her description of the camp closely matches the one given on the website for Camp Aranu’tiq for “transgender” boys, which was featured last year in the Boston Globe, and which makes campers and visitors sign a confidentiality agreement.  According to theGlobe, it is the only camp of its kind in America.

Morris, who recently published the photoessay on her website, told Slate that the camp is aimed at “parents who don’t have a gender-confirming 3-year-old who wants to wear high heels and prefers to go down the pink aisle in K-Mart and not that nasty dark boys’ aisle.”

She said that the fashion show was one of the highlights of the camp, and something that many boys and their families worked to prepare for all year.  “Some … create their own gowns with their mothers or friends of the family,” Morris said. “The focus and enthusiasm is really pretty incredible.”

On her own website, Morris describes the camp as “a temporary safe haven where gender-variant boys can freely express their interpretations of femininity alongside their parents and siblings.”  Adds Morris, “Here, they can be true to their inner nature without feeling the need to look over their shoulders.”

On the website for Camp Aranu’tiq, a parent testimonial offers similar praise, claiming the camp gave her son “the BEST experience” of his life.

“[S]he [sic] grew into a confident and more outgoing girl during her [sic] time there!!” the anonymous parent raved, adding that her son has “been empowered through the validation and acceptance she [sic] received at camp.”

But senior fellow for Policy Studies at the Family Research Council in Washington D.C., told the Christian Post that he fears well-meaning parents may be doing more harm than good by bringing their boys into an environment that reinforces and celebrates their gender confusion.

“There is a risk of locking children into a life course, which, if they had been left to develop naturally, they would have outgrown,” Sprigg told the Christian Post.  “You’ll have children who are going through natural periods of confusion and experimentation with their sexuality and all of a sudden you have adults telling them, this means you’re gay, you were born gay, you will never change.”

He told the paper he worries that parents who allow their children to attend the camp “run the risk of putting them on a path, and locking them in a transgender identity when that may not have been the natural course of their life at all.”

Dr. Kenneth Zucker, chairman of the American Psychiatric Association subcommittee on gender identity disorders, would seem to agree with Spriggs on that point.  Zucker told LifeSiteNews in December that he believes allowing children to act out their gender confusion can have lasting harmful effects.

“I think that when people…label a child as transgendered, it kind of has the connotation of immutability,” Zucker told LifeSiteNews. “I take a very developmental approach to the treatment of gender dysphoria.  I don’t think that gender dysphoria is something that is only going to respond to biomedical treatment. The real question is, when in development does the desire to be the other gender become locked in or fixed?”

According to Zucker, young children experiencing gender confusion may respond better to therapies that help them embrace their biological sex.

“With young children, I think there’s much more pliability,” he said. “Often, the gender dysphoria remits, for whatever reason. These kids don’t grow up wanting to be the other gender. People need to be cognizant that there are other developmental trajectories.”

See also “Psychiatrist says scientifically, there is no such thing as transgender.”