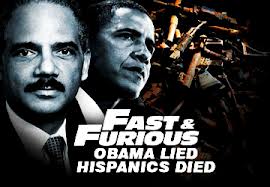 In the wake of the revelation that a Mexican police chief was found murdered with one of the weapons from the Obama administration’s Fast and Furious Operation, Senator Chuck Grassley (R-IA) and Congressman Darrell Issa (R-CA) sent a letter to Attorney General reminding him that he has an obligation to inform Congress when weapons from his Fast and Furious operation are found at crime scenes.

In the July 12, 2013 letter to Holder, Grassley pointed to the LA Times article that reported the death of the Mexican Police Chief back on January 29, 2013. “According to the Times article, “internal Department of Justice record,” including a trace record, show that in February 2010, convicted Operation Fast and Furious target Jacob Montelongo purchased the weapon recovered from the suspects following the killing of the local Mexican police chief,” wrote Grassley and Issa.

They then added, “Records we obtained during our investigation of Operation Fast and Furious indicate that the weapon was entered into ATF’s “suspect gun database” after its purchase. Montelongo purchased at least 1009 weapons in Arizona during Fast and Furious, which were contemporaneously tracked in ATF’s database.”

“Since the beginning of this investigation, we have followed the link between Fast and Furious weapons and crimes committed on both sides of the border. On numerous occasions we have asked the Department to keep us apprised of Fast and Furious weapon recoveries — especially as they relate to violent crimes,” Grassley and Issa wrote.

The letter not only deals with the police chief’s death, but also expanded to talk about those deaths as a result of Fast and Furious uncovered by the television network Univsion and the death of a Mexican beauty queen and Mexican military member in a shootout in November of 2012, which was the result of the use of a Fast and Furious weapon.

To that, I ask Senator Grassley and Congressman Issa, “Ya think?” This is what you guys have been face with all along: stonewalling. Words are no long enough. It’s been nearly two years that Congress has been “investigating” Fast and Furious and still they don’t have the documents they’ve requested. The Obama administration and Eric Holder have thumbed their noses at you and you just sit there and take it.

The following questions were then asked of the Justice Department:

1) With regard to the weapon used to kill Mexican police chief Luis Astorga:

b. Was the Department planning on notifying Congress that a Fast and Furious weapon had been recovered?

c. Why did the Department fail to report the recovery of this weapon to Congress?

d. Was this weapon traced to any other crimes in Mexico or the United States?

e. When did the Department first learn of the connection between this weapon and Fast and Furious? How?

f. Were any other weapons connected to Fast and Furious recovered along with the murder weapon?

g. Was there an attempt to discuss this recovery or weapon with Montelongo?

2) Is the Department aware of any recoveries of the other three weapons that Montelongo purchased on February 22, 2010?

3) As of the date of this letter, what is the total number of weapons associated with Fast and Furious that have been recovered in the U.S. and successfully traced?

4) As of the date of this letter, what is the total number of weapons associated with Fast and Furious that have been recovered in Mexico and successfully traced?

5) Of the U.S. recoveries, how many were recovered in relations to an incident of a violent nature?

6) Of the Mexican recoveries, how many were recovered in relation to an incident of a violent nature?

7) How many other trace records does the Department possess that link killings in Mexico or the United States to Operation Fast and Furious?

They were given a deadline of July 25, 2013 to respond. As in the past, one wonders if there are any teeth to that deadline should the DOJ be unwilling to answer the above questions. I won’t hold my breath given their past track record.