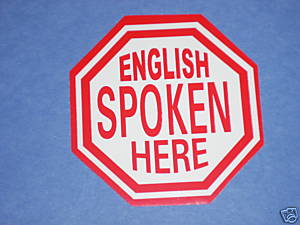 Last April, Terri Bennett, asked that all classroom discussion be spoken in English.  Little did she realize what a can of worms she was opening.  Bennett attended Pima Community College (PCC) in Arizona for nursing and the classroom discussions seemed to be more in Spanish than in English.  This was making it difficult for her to learn, since she does not speak Spanish.  Her request prompted some really inane remarks from wanna be educators.

Nursing program director David Kutzler called her a “bigot” and a “bitch.”  Kutzler proclaimed that Bennett was discriminating against Mexican American students.  (Does anyone else think this guy should have his credentials taken away?)  The unfair treatment of Ms. Bennett, age 50, who was just trying to improve her lot in life and was desirous of learning, is systemic of the way liberals approach teaching.

Ms Bennett was then suspended from the school and her reputation besmirched (Also the way liberals react when they know they are in the wrong) and told she could not return until she received counseling….for speaking English!!!!  She had received a write-up for poor communication skills.  I assume because she didn’t learn to speak Spanish.  Bennett has now obtained legal representation and is suing the school for breach of contract, harassment, retaliation, discrimination and violating the Arizona constitution.

The Arizona constitution recognizes English as the state’s official language and no discrimination or penalties are allowed for doing so.  Section Three of that statute reads:

“A person shall not be discriminated against or penalized in any way because  the person uses or attempts to use English in public or private communication.”

This language is plain and straight forward.  In my not so humble opinion, the school should be shuttered for a willful and direct violation of the state constitution and Bennett’s civil rights.  If they wanted a Spanish-speaking school , that is fine but they cannot discriminate against a legal citizen of the United States.  Fortunately, Bennett has some very high-powered legal advisers.  John Munger, a lawyer who ran unsuccessfully for governor, is representing her along with Phil Kent, an Atlanta-based activist against illegal immigration.

The school maintains they did nothing wrong. Just like Obama.  In fact they only found out about the problem when they saw it on TV.  (rofl) PCC is a rinky dink little school even though they do have 30,000 students on several different campuses and a Spanish enrollment of about 38%.  Their most famous student is Jared Loughner, who shot Gabrielle Gifford and several others.  He is being prosecuted for failing to shoot his gun in Spanish. El bango, el bango.