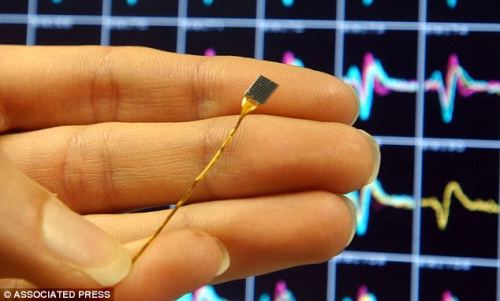 How would you like that to be implanted into your brain?

That’s what Google aims eventually to do.

While visiting Google’s headquarters in Mountain View, in the San Francisco Bay Area, Ian Burrell reports for the UK’s Independent, July 20, 2013, that the world leader in Internet searches wants an even higher profile.

With an annual revenue of more than $50 billion and handling as much as 90% of Internet searches in the UK, Google now wants more — much more.

Google wants to become our constant companion — a personal assistant that never stops working, capable of conversing naturally in any language. (Natural language means the computer can understand what is being spoken, e.g., that “tall” refers to height, and hold a conversation.) Ultimately, as Google’s co-founders Larry Page and Sergey Brin have asserted, the goal is to insert a chip inside your head for the most effortless search engine imaginable.

The first stage of this new level of “intimacy” (or intrusion) is already here.

It is Google Glass — a pair of glasses that weighs about the same as a typical pair of sunglasses due to its largely titanium frame.  You turn the contraption on by tapping your finger on the right side of the frame where all the technology is stored, or surreptitiously throwing your head back. On a screen projected a few inches in front of your right eyeball is a digital clock and the magic words “OK glass”, the uttering of which takes you to a range of task options: ask a question, take a picture, record a video, get directions to, send a message to, make a call to, make a video call to.

The idea of Google Glass (GG) is that you can walk down busy streets receiving helpful facts – without needing to take your cell phone from your pocket. The lure is that GG could end the urban hazard of pedestrians staring at their smart phones instead of looking where they’re going.

Google’s billionaire co-founder/CEO Larry Page walks down the aisle with a bridesmaid, wearing a pair of Google Glass, at his brother-in-law’s wedding in early July 2013, in Croatia. (Source)

At the moment, GG is a work in progress. Its prototype is called the Explorer and the 10,000 Americans – mostly web developers and heavy social-media users – who are trying the apparatus are called “explorers.”

Burrell gave Google Glass a try, and reports that answering questions is its central feature. It likes straightforward instruction such as “OK Glass… Google – what is the height of [UK Prime Minister] David Cameron?”, returning within four seconds with an image of Cameron and a computer voice saying “David Cameron is six feet zero inches tall”. But when Burrell asked for the name of the wife of Cameron’s predecessor, Gordon Brown, he was offered details of The Stranglers’ 1982 pop song, “Golden Brown.”

Burrell also tried asking GG to take a picture. Three seconds after giving the order, he had a shot (or film) that can be shared with friends on the Google+ social network. One GG explorer recently used the eyeglasses to snap a police arrest as it was taking place. Burrell’s conclusion:

The potential of Google Glass is enormous. The more you hand your life over to Google, the more you get out of this technology.

Google is also amassing a vast store of information called the Knowledge Graph, which is growing at an exponential rate. When it launched in May 2012, Knowledge Graph was a pool of 3.5 billion facts on 500 million of the world’s most searched subjects. In a little over a year the knowledge held on the Google servers has grown to 18 billion facts on around 570 million subjects.

The Knowledge Graph is the base for Google Now, the latest incarnation of Google which is personalizing the search engine by giving you a series of bespoke “cards” as you log on. They tell you the local weather, the traffic you might face on the way to work, details of your meetings and restaurant bookings taken from your Google email account, your team’s latest result and so on.

Scott Huffman, Google’s engineering director, says the company’s intention is to “transform the ways people interact with Google,” which means having conversations similar to those you would have with humans.

Huffman says, “If you look back 10 years there was a computer on my desk and today there’s a computer in my pocket and it still has a screen and a keyboard. But fast forward a bit and… I think there is going to be a device in the ceiling with microphones, and it will be in my glasses or my wristwatch or my shirt. And like the Google Glass it won’t have a keyboard… you just say ‘OK Google, blah-blah-blah’ and you get what you want.”

After NSA (National Security Agency) whistleblower Edward Snowden‘s revelations about the agency’s clandestine electronic-surveillance program PRISM, Google co-founder and CEO Larry Page hastened to deny claims in leaked NSA documents that Google – in parallel with other American internet giants – had been co-operating with the spying program since 2009.“Any suggestion that Google is disclosing information about our users’ internet activity on such a scale is completely false,” he said.

This is the same Google that aims eventually to implant a microchip in our brains. Do you trust Google or any organization to do this?

I know my answer to that question!

See also an article in the Daily Mail, May 7, 2013, about a group of U.S. researchers who say a microchip that will help create memories in damaged brains (e.g., of Alzheimer’s patients) could be implanted into human volunteers in the next two years.