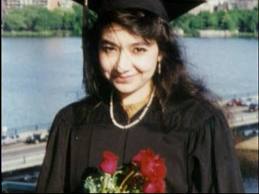 Aafia Siddiqui  is a MIT-trained neuroscientist who married a top Al Qaeda operative who intended to blow up gas stations or poison water reservoirs in the United States. She is known as “Lady Al Qaeda,” and was convicted of attempting to murder Americans in Afghanistan after she was found with plans for a “mass casualty attack” in the United States, along with a list of New York landmarks.

Aafia Siddiqui named Farha Ahmed as her legal counsel in a handwritten letter in October of 2010. Farha Ahmed was running for office in Texas. Farha Ahmed was the leader of the anti-Geller protests outside my Sugar Land, Texas Tea party event.

Farha Ahmed, lawyer for chemical weapons jihadist Lady Al Qaeda, also tried to infiltrate the Republican party by running for office. Ahmed ran for Sugar Land City Council District 4 but was defeated, thanks to great Americans who alerted Texans to the subversive politician in their midst. Ahmed lied about her involvement in the Lady Al Qaeda case. Despite the craven quisling government officials like the DA, who wrote glowing letters to their constituents endorsing the stealth jihadist candidate Ahmed, and the fact that her terror-tied alliances were scrubbed from the web, she was defeated. But remember, the enemy never sleeps and never quits. So she will be back.

And Aafia Siddiqui will be going back to Pakistan, thanks to yet another Obama capitulation to jihad. How long will it be before the Pakistani government releases her?

US agrees on Aafia Siddiqui’s extradition The Nation (Pakistan), July 19, 2013

In a major breakthrough, the US has offered Pakistan to sign prisoner swap agreement for the extradition of Dr Aafia Siddiqi, after which the Pakistani scientist will be allowed to serve the remaining part of her imprisonment in homeland.

Talking to a private TV channel, the spokesperson of the foreign office Umar Hameed also confirmed that the US has offered Pakistan to sign prisoner swap agreement after which both countries will release each others prisoners.

According to the documents, the US told Pakistan in writing that the only legal way for the extradition of Dr Aafia Siddiqi was to sign prisoner swap agreement with the US. The US offered two deals that include European Convention on the Transfer of Sentenced Persons and Convention on Serving Criminal Sentences Abroad in this regard.

Meanwhile, it was also revealed that the Interior Ministry had formed a task force following the US offer which held its first session on July 3 to review the agreement.

The task force was established under the directives of Interior Minister Chaudhry Nisar Ali Khan, the channel said.

The Pakistani neuroscientist was sentenced to 86 years in prison after she was convicted of grabbing a US soldier s M-4 assault rifle and trying to shoot a group of FBI agents and soldiers at an Afghan police compound in July 2008, a charge she consistently denied during the trial.