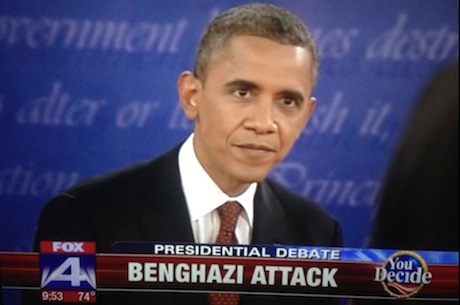 To see where this administration is headed and what it values, one would only have to look at the earlier story of Susan Rice. Her continual lying to the press gained her a brand new National Security Adviser job back in June. Obama is a fair man, in a dysfunctionally corrupt sort of way, and he will continue to reward those who have covered for him. He has to. You have to keep people happy when they have loads of dirt that could bury you.

Today the Senate Foreign Relations Committee approved the still pending promotion of Victoria Nuland who is one of the key spin doctors involved in the infamous Benghazi talking points.

One of the authors of the infamous State Department Benghazi talking points is on track for a promotion after passing a key congressional hurdle Tuesday.

Lawmakers on the Senate Foreign Relations Committee approved by voice vote the promotion of Victoria Nuland to serve as Assistant Secretary of State for European and Eurasian Affairs.

Nuland was previously the top spokeswoman at the State Department.

Earlier this month, Nuland was grilled on Capitol Hill by Republicans about her involvement in crafting the department’s talking points during the aftermath of the attacks on the diplomatic mission in Benghazi, Libya.

Some argue Nuland’s role in the Benghazi aftermath should preclude her from taking the job.

This story is developing and we will continue to follow it. For now it seems that there is an eerie consistency in this administration. If you are willing to get dirty and lie to people then you will continue to move up the ladder.

We will do our best to keep exposing these people for who they are and my hope is that someday it might make a difference.

If you want a logical breakdown of what likely happened in Benghazi you should read this article:

The Butcher of Benghazi

The alternate is to keep believing the lies that our government and government controlled media are feeding you. Congress isn’t even asking the right questions. This case was wrapped up months and months ago by smart investigators who put all the pieces together and evidence continues to mount in support of those scenarios. It’s far worse than most of the major right-wing media sources are telling you. Obama and Clinton were not just negligent. They were probably involved.

We will continue to fight for the truth and the truth shall set us free.