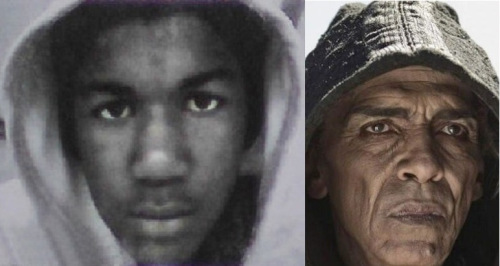 Not content with the already scores of Trayvon protests and riots by Zimmerman lynch-mobs across America, the community agitator in the White House is now ratcheting up the heat.

On Friday, July 19, 2013, in a surprise appearance in the White House briefing room, Obama compared himself to Trayvon in his first public remarks on the Florida jury’s acquittal of George Zimmerman of all murder/manslaughter charges in last year’s shooting of 5′ 11″ Trayvon Martin. (My rebuttals to Pres. Lucifer are in bold italics.)

As reported by Olivier Knox for Yahoo, Obama pours more oil on the raging fire, saying that “many African-Americans” believe that “both the outcome and the aftermath might have been different” if Martin had been white. (Mr. President, do you mean the very white and blonde Nicole Simpson?)

“You know, when Trayvon Martin was first shot, I said that this could have been my son. Another way of saying that is Trayvon Martin could have been me 35 years ago.” (That’s so true, Mr. President! Both you and Martin did dope! You admitted in your memoirs you had “done” cocaine in high school and college and, if you’re honest, even in adulthood while you were an Illinois state senator. Just ask Larry Sinclair!)

Then, pouring even more oil on the raging fire among many black Americans, Obama described his alleged experience with race-based prejudice:

Hey, Pres. Lucifer. Former U.S. Senator Allen West, who is more black than you, says he experienced none of that: “I am a black male who grew up in the inner city of Atlanta and no one ever followed me in a mall. I don’t recall any doors clicking when I crossed the street. And I never had anyone clutching their handbag when I got on an elevator. I guess having two awesome parents who taught me  to be a respectful young man paid dividends.”

Then Obama admitted that the Zimmerman trial judge had “conducted the trial in a professional manner,” that both prosecution and defense “made their arguments,” and that the jurors “were properly instructed that in a case such as this reasonable doubt was relevant, and they rendered a verdict,” and that “once the jury has spoken, that’s how our system works.”

Mr. President, then why are you now stirring the pot and fanning the flames?

It’s because the more black Americans are encouraged to lynch George Zimmerman, the less they’ll remember that you, after 4½ years in the White House, had done squat in improving the economy and the living circumstances of not just blacks, but all Americans. All you’ve done is to add more Americans to the public dole, and inflate our national debt to a dizzying $16.872 trillion — and counting.

It’s because the more sheeple Americans and the State Controlled Media remain fixated on George Zimmerman and “justice” for Trayvon, the less we’ll think and talk about all the many impeachment-worthy scandals of your regime — Benghazi-gate, IRS-gate, NSAsurveillance-gate, etc. etc.

Lastly, Mr. President, since it was your DOJ goons who are behind all those Trayvon Martin protests last year (see “Audio evidence that Obama’s DOJ is behind Trayvon Martin racial unrest,” July 12, 2013), your remarks last Friday are even more hypocritical and disgusting.