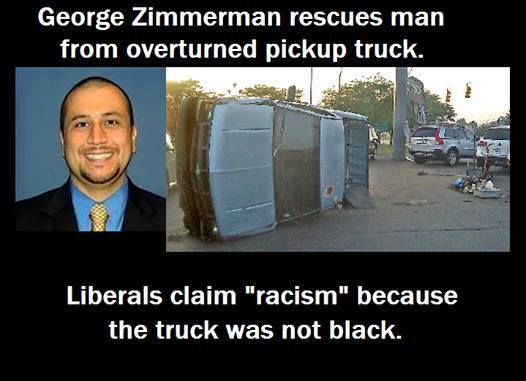 When is George Zimmerman going to stay in his car? I can hear people now. Well thankfully he didn’t. Zimmerman, who has been hiding since his “not guilty” verdict was read, emerged as one of two men who came to the aid of a family of four (two parents and two children) who were trapped inside a blue Ford Explorer SUV which had rolled over near the intersection of I-4 and Route 46 in Sanford, nearly a mile away from where Zimmerman shot and killed Trayvon Martin in February 2012.

The accident happened around 5:45pm on Thursday, according to the Seminole County Sheriff’s Office.

By the time police arrived, two people – including Zimmerman – had already helped the family get out of the overturned car, the sheriff’s office said. No one was reported to be injured.

Zimmerman was not a witness to the crash and left after speaking with the deputy, police said.

Sanford Police Department Capt. Jim McAuliffe told Fox News that Zimmerman, 29, was identified by a crash victim as the man who pulled him from the mangled vehicle.

“George Zimmerman pulled me out,” firefighters were told by the unidentified driver, according to McAuliffe.

Zimmerman was not a witness to the crash and left after making contact with the deputy, the sheriff’s office said.

This is the first known sighting of Zimmerman since his acquittal.

On another note, the Sanford police confirmed on Monday that they transferred boxes of evidence from the investigation into the shooting of Trayvon Martion, including Zimmerman’s gun to the Department of Justice. Under Florida law, Zimmerman is entitled to get his gun back, but being the race baiters the Obama administration are, it looks as though he may have to sue the federal government to get his weapon back.

I’d say this seems to be characteristic of a man who is looking out for others. When you combine this with other facts of Zimmerman’s history, I think it is quite telling of what his life was like before and after the shooting of 2012.