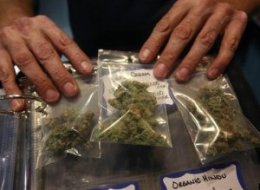 The Colorado Springs city council voted Tuesday by a 5-4 margin to ban retail marijuana shops from opening within the city limits. With its large Christian and military community, Colorado’s second largest city is one of the more conservative cities in an otherwise left-leaning state. Colorado Springs joins numerous other cities who have opted-out of allowing recreational marijuana stores to open in their communities.

A stunned crowd sat silent for a moment Tuesday after the 5-4 vote to ban retail marijuana sales in Colorado Springs was read into the record.

“The city has opted out,” Council President Keith King said at the city council meeting, which was packed with people who testified during a nearly two-hour public hearing.

About 50 proponents of retail sales stormed out, with someone angrily yelling, “I hope you’re happy.”

The decision came down to council member Val Snider, who was the swing vote to ban retail marijuana sales in the city – a surprise to proponents of Amendment 64. Snider had kept his views on the issue close to the vest over the past months and during recent public hearings.

Snider, an at-large city council member, said he could not reconcile the conflict of allowing retail pot sales with federal law, which lists marijuana as a Schedule 1 controlled substance. He also said allowing pot to be sold over the counter would send the wrong message to youth.

“Bottom line, I’m not convinced we need to make it more accessible,” he said.

Colorado voters in November approved Amendment 64, which allows adults over 21 to possess one ounce of marijuana for recreational use. The law also allows stores to sell marijuana and other products made with marijuana, with a city’s approval. Already more than 20 Colorado cities and towns – including Woodland Park, Green Mountain Falls and Castle Rock – have opted not to allow such sales.

This is a story that isn’t getting much press nationally, but much like the State of Colorado chose to go in its own direction with recreational marijuana, so too have several of its great cities.

So what is the true definition of freedom in this case?

Is American freedom about these cities and towns being able to make their own decisions regardless of what state governments decide?

Or is freedom more about people having the option to partake of marijuana if they would like? Many people feel it is a victimless crime.

I have my own very strong opinions on marijuana usage but for once I am going to step aside and ask you what you think. My opinions are biased because 20 years ago I was a user and never want to go back to that lifestyle. It didn’t work for me.

But that’s just me and I don’t speak for all Americans. That is my personal choice and nothing more. I will say that I really don’t want my kids growing up in Denver but it is my choice not to live there.