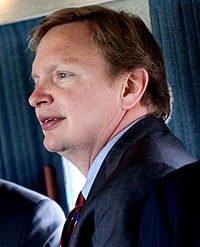 Jim Messina, the man who is Barack Obama’s former campaign manager and now is the chairman for Obama’s advocacy group, Organizing for America, recently said that the group is going to push for comprehensive immigration reform in the U.S. House of Representatives. “We are going to force it through the House,” said Messina.

The Washington Post reports that Messina added, “I will sit with you and cry when Barack Obama signs his name on that law and millions of people come out of the shadows.”

What exactly does Obama have in mind? It appears that it is pretty much everything that is in the Senate’s amnesty bill which passed 68-32 at the end of June. Not only did it contain a $5,000 penalty for hiring hiring citizens over legalized aliens, but there were a number of serious financial and national security issues that were in the bill as well.

Though OFA has not come close to meeting its $50 million goal for donations, it has barely received $13.1 million through June, claiming the support of 237,000. The organization is the first in history to go from a campaign to an advocacy group, as we told you about. Yet though they have held more than 6,500 events about the country calling on Congress to pass tougher gun-control laws and approve comprehensive amnesty, they have not been quite as effective at actually affecting legislation.

The advocacy group has received criticism from local party officials for targeting four conservative Democrats who would not support stricter background checks for gun purchases.

Tony Lee points out, “OFA generated embarrassing headlines when it only attracted eight people last month in Indiana and twenty in Tennessee for rallies in support of immigration reform.”

While the numbers seem to be against them fulfilling their mission, OFA chairman Messina says otherwise. “Of course, the naysayers are back saying, ‘Oh, change is hard,’ ” Messina said, adding, “You haven’t seen nothing yet. I just need double the amount of work and two and half times the money,” he said. “We are off to a very fast start . . . but we’ve got to double down.”

This simply means that we as Americans will have to continue to stand fast against the socialist agenda being put forth by the Obama administration and OFA and continue to demand that our leaders do what we tell them to. Of course, that will require that we remove those from office, like John Boehner, who doesn’t think it’s his job to take a stand on the issues and lead.