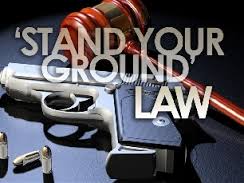 A Houston, Texas woman fatally shot a man at a gas station as he apparently made sexual advances towards her and lunged at her, armed with a knife and umbrella. She produced a .22 caliber rifle from her trunk to defend herself and once she shot him, she took pictures of his body with her cell phone and then drove off. Police say that due to the gas station’s video evidence, which caught the entire episode, the woman will likely not be charged due to Texas’ “Stand Your Ground” law.

The confrontation occurred Sunday evening at the Gulf station located on Cullen Boulevard near Yellowstone in southeast Houston.

As you can see from the news report, which showed the surveillance video from the gas station, the twenty-three year old woman was clearly giving warning to the man to leave her alone. She retrieved the weapon after Louis Daniel, 58, made unwanted sexual advances towards, according to the woman. She claims she felt her life was in danger and retrieved the gun, but it wasn’t until he lunged at her that she stepped back and fired several rounds at him, killing him. He was pronounced dead at the scene.

According to the Daily Mail, “A witness told police that she then took out her phone and recorded a picture or video of her victim.”

According to police, the shooter claimed the man had made unwanted sexual advances and refused to leave her alone. She also told police she feared for her life.

According to witnesses, the victim was acting strangely.

“He had an expression like he was just mad at the world,” said Jon Thomas who was in the parking lot at the time of the gunfire.

“She just had the gun pointed down to the ground and said get back. I guess he didn’t expect or like that.”

According to family members, Daniel had just left his brother’s car wash and walked over to the gas station where the confrontation took place.

“He didn’t seem like anything was wrong with him,” said Daryl Daniel, who admitted his brother often carried a pocket knife for self-defense.

“It’s like something happened out of the ‘Wild Wild West’ or something,” Daniel said. “You go get a gun out of your trunk and come back and the person standing there, he doesn’t even have a gun.”

Perhaps this should be a lesson for men who can’t keep their mouth shut and feel the need to treat women as sexual objects to be gained. You never know what lady is packing and for good reason.

“I think it’s clearly justified. If she was in reasonable fear that deadly force was going to be used on her or the threat of deadly force,” said legal analyst Gerald Treece. “She just got hit, she can use deadly force in return.”

Police have not charged the woman, but say the case will be referred to a grand jury. They are also asking for help from anyone who may have witnessed the shooting to come forward.