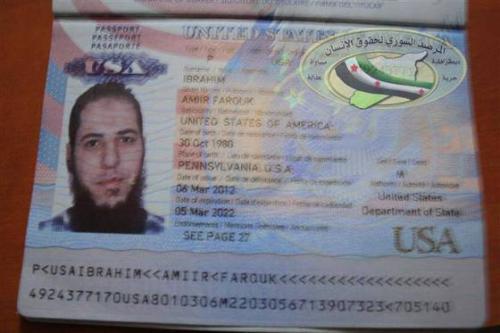 Obama to move forward with plan to arm Syrian jihadists ……. with people and passports, perhaps.(/sarc tag off)

Now wait a minute. We’re constantly told that no Muslims in the U.S. — none — adhere to Al Qaeda’s understanding of Islam, and only greasy Islamophobes think otherwise. So how did Amiir Farouk Ibrahim, no doubt known to all and sundry back home in Pennsylvania as a solid and respectable burgher of serious mien, come to misunderstand his peaceful religion so resoundingly?

“American passport found at al Qaeda base in northern Syria,” by Bill Roggio for the Long War Journal, July 23 (thanks to Jerk Chicken):

A passport said to belong to an American citizen was found among a number of identification documents belonging to foreign fighters who have been waging jihad with al Qaeda inside Syria. The documents were discovered at a base abandoned by the Islamic State of Iraq and the Levant, an al Qaeda affiliate that operates in Syria.The American passport belongs to Amiir Farouk Ibrahim, who was born in Pennsylvania on Oct. 30, 1980. Ibrahim’s passport was issued on March 6, 2012.

Ibrahim also possesses an Egyptian passport, which was issued on Sept. 23, 2012 under the name Amir Farouk Zaki Ibrahim. His Egyptian passport also states that he was born on Oct. 30, 1980 in the United States….

If Ibrahim’s identity as an American citizen is confirmed, he would be the second American known to wage jihad in Syria in the ranks of al Qaeda. Eric Harroun, a former US soldier, is in US custody and is charged with fighting alongside the Al Nusrah Front, al Qaeda’s official affiliate in Syria.