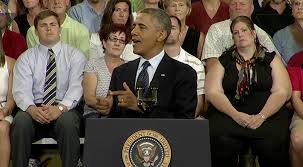 Remember when Barack Obama told the American people that if he couldn’t fix the economy (not like a president has that power anyway), that it would be a one term proposition? Well, apparently he didn’t mean it. In fact, in a speech at Illinois’ Knox College, Obama blasted Republicans for his five years of a failing economy, blaming it on “distractions, political posturing and phony scandals.”

The speech is the “same old same” old from Obama. He talks about roads and bridges that need repair, fighting those making too much money and fighting poverty, all of which continue to exist. One of the points he made really made me chuckle and that is how he continues to promote the idea of “saving the auto industry.” In light of the recent admission by the city of Detroit that they are bankrupt and the fact that General Motors is building plants in Mexico, after stiffing taxpayers for $10 billion, I just shook my head at the outright lies this man tells.

“Today, five years after the start of that Great Recession, America has fought its way back. Together, we saved the auto industry, took on a broken health care system, and invested in new American technologies to reverse our addiction to foreign oil and double wind and solar power,” Obama said. “Together, we put in place tough new rules on big banks, and protections that cracked down on the worst practices of mortgage lenders and credit card companies.  We changed a tax code too skewed in favor of the wealthiest at the expense of working families, locking in tax cuts for 98% of Americans, and asking those at the top to pay a little more.”

First and foremost the auto industry was not dying, just General Motors. Ford didn’t have their hand out and neither did many auto manufacturers. The real issue was Obama was out to pay his buddies back for helping him get into office.

Second, the health care system is broken far more now than it was when he took office. In fact, it’s so broken, that his administration is pushing back certain aspects of his “not so” Affordable Care Act for an entire year.

It’s true he did change the tax code, in more ways than one. He, along with Congress, did stick it to the American people for sure when they did their little fiscal cliff deal earlier this year and Nancy Pelosi basically said that the Democrats aren’t done taxing Americans!

As for his investments, I mean, redistribution of wealth to wind and solar companies, we saw how that worked out. Solyndra, anyone? That entire fiasco was more pay back and a complete waste of American’s money,but what did David G. Frantz, Obama’s Acting Executive Director of the Department of Energy Loan Program back in July of 2012 say about those loans, including those to Solyndra? He said the Department of Energy’s loans were and “enormous success.”

Ultimately it led to thousands of jobs lost and literally billions of dollars squandered, all at the expense of the American taxpayer.

We’ve got 50 million people on food stamps and 23 million people unemployed. Our gas prices are averaging about $3.68 per gallon and yet we keep getting stuck with the tab for Obama’s Keynesian economic incompetence.

Ah, but that was just the warm up. Instead of taking blame for his agenda’s failure, he turns to Republican and blames the economy on “distractions, political posturing and phony scandals.”

“With an endless parade of distractions, political posturing and phony scandals, Washington has taken its eye off the ball.  And I am here to say this needs to stop.  Short-term thinking and stale debates are not what this moment requires.  Our focus must be on the basic economic issues that the matter most to you – the people we represent,” Obama said.

Hmmm. Well, let’s see. Was Operation Fast and Furious, which his Justice Department and ATF oversaw and which resulted in the deaths of 2 federal agents and hundreds of Mexicans, including a beauty queen and police chief phony? How about Benghazi and his administration knowingly engaging in lies to the American people about it and then knowingly did nothing to help Americans who were under attack from Muslim jihadists? Was that phony? Was it phony that Obama’s IRS targeted his political enemies? Was it phony that Obama’s NSA has been spying, apparently unlawfully, on millions of Americans? Was it phony that his Justice Department were sticking their noses where they didn’t belong when it came to AP and other media reporters?

I didn’t even mention that a budget has yet to be passed under his administration and he has overseen four consecutive years of over $1 trillion in deficits, while claiming to cut deficits, plus an ever growing national debt. Obama is a big believer in taxing and spending your way to prosperity. The only problem is, it’s an illusion.

It’s true there are lots of distractions, but those aren’t among them. Obama just sticks to the playbook and continues to blame everyone and everything for his failures, but himself.

Here’s the entire speech, if you can stomach it.