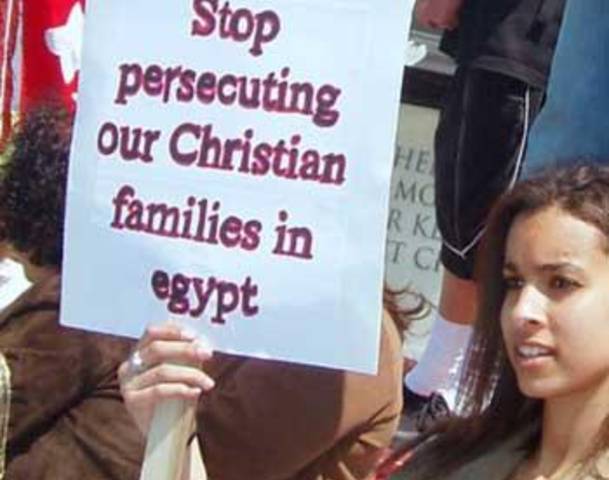 The revolution in Egypt was a feel good story for a couple of weeks but we will wait to see if the country truly takes a new direction. Whether Morsi and The Muslim Brotherhood are in power, or not, it does not change the fact that Christians are constantly persecuted and killed in Egypt simply because they refuse to bow down to Allah.

Security forces stood by and failed to intervene during a brutal attack on Coptic Christians in Luxor, Amnesty International said in a briefing published today. During the sectarian violence, security forces left six besieged men –four of whom were then killed and one hospitalized – to the mercy of an angry crowd.

In an attack lasting 18 hours on 5 July, four Coptic Christian men were killed and four others were seriously injured. An angry mob armed with metal bars, knives, tree branches and hammers attacked Christian homes and businesses in Nagah Hassan, 18 km west of Luxor, after the dead body of a Muslim man was discovered near the homes of Christian families. Despite local residents’ and religious leaders’ repeated calls for help, security forces on the scene made only half-hearted attempts to end the violence and sufficient reinforcements failed to arrive.

“It is outrageous that this attack was left to escalate unhindered in this way. Amnesty International has documented a series of cases in the past where Egypt’s security forces used unnecessary force or live fire during demonstrations, yet in this case they held back even though people’s lives were threatened,” said Hassiba Hadj Sahraoui, Deputy Director of Amnesty International’s Middle East and North Africa Programme.

“A thorough, impartial and independent investigation must be conducted into the events in Luxor and the grossly inadequate response of the security forces to the attack.”

According to this report is seems quite plausible that a Coptic Christian could have killed a Muslim. Is that possible? It certainly is, but that is not entirely the point.

One of the constant international criticisms of Morsi was that his police forces would look the other way when Christians were attacked and killed. Bringing one rogue Christian to justice is much different than facilitating unnecessary violence toward lots of innocent people.

This is the reputation of Egypt and their law enforcement. It will be interesting to see if these attacks are treated differently in the future but so far it looks like the same old Egypt.

The fear shared by many who study the region is that nothing has really changed. Morsi lost favor with the people for a lot of reasons and not all of them had to do with  the economy. There are many reasons and you can not trust American mainstream media sources to report what is going on in Egypt.

A lot of people either do not know or have forgotten about the promise that Morsi made in June of 2012. He promised to get The Blind Sheik released from an American prison. The Wall Street Journal reported on 6-29-12:

Egypt’s President-elect Mohammed Morsi made a nod to his base in a speech on Friday when he pledged to seek the release of Sheik Omar Abdel-Rahman from U.S. custody.

Sheik Abdel-Rahman, who is better known as the “blind sheik” is serving a life sentence at a federal penitentiary in North Carolina for his role in planning the 1993 bombing of the World Trade Center in New York City.

His detention has become a cause célèbre among hard-line Salafi Islamists whom Mr. Morsi counted on in his runoff against ex-regime loyalist Ahmed Shafiq.

Dozens of bearded Abdel-Rahman supporters, many in religious vestments, have slept outside the U.S. Embassy in Cairo in a sit-in that has lasted the better part of a year. A full city block of downtown Cairo is festooned with banners bearing the blind sheik’s image—bearded, capped with a red tarboosh and 1960s-era wayfarer sunglasses.

When Egyptian authorities charged seven U.S. citizens, including the son of a cabinet secretary, with violating laws on foreign funding for nongovernmental organizations in the spring, Sheik Abdel-Rahman’s supporters lined up outside the courthouse calling for a prisoner swap.

That is not the prisoner swap that Obama and Morsi had in mind. Benghazi was more than likely a failed attempt at taking Ambassador Chris Stevens alive to use for a collateral exchange for The Blind Sheik. Lots of evidence has been collected to support this theory and if you would like you can read more about it here.

When important people, that were in “the know,” saw Morsi’s attempt fail they had no more reason to support or protect him. It was time to throw him under the bus and find someone else.

Has anything really changed in Egypt?

Time will certainly tell but my opinion is that things will be just as bad or worse. Morsi was just the scapegoat they needed. Future leaders may not wear the colors of The Muslim Brotherhood but they will likely be cut from the same cloth.

The more things change, the more they stay the same.