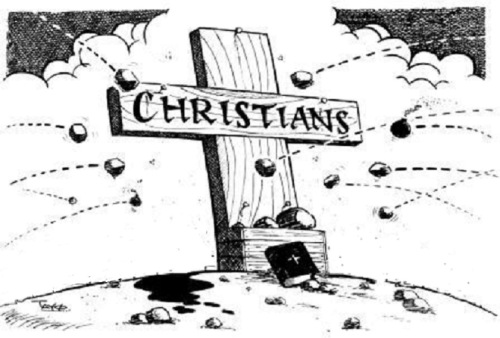 Are you a Christian who takes seriously the Bible’s condemnation of homosexuality?

If you are, and if you live in San Antonio, Texas, you can forget about running for the city council, or getting employment in any city government or business.

Bob Unruh reports for WND, July 23, 2013, that when the San Antonio City Council returns to work from its summer hiatus, it will take up a proposed change to the city’s nondiscrimination ordinances that apparently will discriminate against anyone who has ever “demonstrated a bias” against someone based on categories that include “sexual orientation.” Such persons will be permanently banned from participation in city government, business or employment.

The proposed change would add “sexual orientation” and “gender identity” to the nondiscrimination ordinances, but it does not define “bias,” which, according to local church leaders, could mean someone who declares homosexual behavior is sinful.

The new ordinance would state: “No person shall be appointed to a position if the city council finds that such person has, prior to such proposed appointment, engaged in discrimination or demonstrated a bias, by word or deed, against any person, group or organization on the basis of race, color, religion, national origin, sex, sexual orientation, gender identity, veteran status, age, or disability.”

Anyone in office who demonstrates a bias would be considered guilty of “malfeasance” and removed from office.

Opponents of the proposed plan say it is a violation of constitutional Article VI, paragraph 3, which states, “[N]o religious test shall ever be required as a qualification to any office or public trust under the United States.”

Church leaders who oppose the proposed change argue it violates First Amendment rights to freedom of religion, freedom of speech and freedom of association. The proposed ordinance also violates the Texas Religious Freedom Act and the Texas Constitution.

Pastor Charles Flowers of Faith Outreach International, who has been alerting city residents about the issue, told OneNewsNow that the reference to “bias” could mean anything: “The ordinance … says that if you have at any point demonstrated a bias – without defining what a bias is or who will determine whether or not one has been exercised – that you cannot get a city contract.Neither can any of your subcontractors [who have demonstrated a bias] sign on to the contract.”

Flowers calls the measure “unprecedentedly wrong” and said “the citizens of San Antonio must stop it.”

Many pastors are concerned, reported KHOU-TV’s Joe Conger in Houston. More than a dozen church leaders met to discuss the looming issue. They say the proposed ordinance allows the city council “to prohibit those that speak their religious beliefs regarding homosexuality from serving on city boards. For example, if a person publicly expresses their religious belief that homosexual behavior is a sin – even if this expression is at a church service – that person could be frozen out of involvement with city government.” Moreover, businesses run by people of faith can also be subject to criminal penalties if they refuse to provide services that conflict with their religious beliefs relating to homosexuality.

Pastor Steve Branson of Village Parkway Baptist Church told KHOU, “If you voice any opinion, no matter how many years back it’s been, it can be used against you. City employees are going to be greatly affected by this” and could get fired.

The San Antonio City Council, which declined to advance the plan when it first was discussed, is scheduled to resume talks on the proposed ordinance in August.