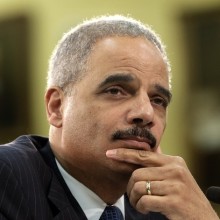 On Thursday, Attorney General Eric Holder said that his (In)Justice Department would ask a court to require the state of Texas to get permission from the federal government before they make any voting changes for the next decade.

Holder spoke before the National Urban League in Philadelphia indicated that the DOJ would be filing a motion later on Thursday, which would be the Obama administration’s strategy to attempt to reimpose “preclearance” requirements in parts of the country that have a history of discriminating against minority voters.

“Today I am announcing that the Justice Department will ask a federal court in Texas to subject the State of Texas to a preclearance regime similar to the one required by Section 5 of the Voting Rights Act,” Holder said. “This request to “bail in” the state – and require it to obtain “pre-approval” from either the Department or a federal court before implementing future voting changes – is available under the Voting Rights Act when intentional voting discrimination is found.”

Last month the Supreme Court struck down a portion of the Voting Rights Act. This is just one in a long line of steps in which the Obama administration has demonstrated its utter contempt for the law. Its immigration policy and failure to defend the Defense of Marriage Act (DOMA) are among others.

Southern states from Texas to North Carolina have pushed to enforce or enact new restrictions on voting eligibility following the Supreme Court’s ruling in the Shelby County v. Holder case.

“This is the department’s first action to protect voting rights following the Shelby County decision, but it will not be our last,” Mr. Holder said. “Even as Congress considers updates to the Voting Rights Act in light of the court’s ruling, we plan, in the meantime, to fully utilize the law’s remaining sections to subject states to preclearance as necessary. My colleagues and I are determined to use every tool at our disposal to stand against such discrimination wherever it is found.”

When properly translated, what Holder really means is that he wants every available means to have illegal voters participate in the voting process and he is willing to use the long arm of the federal government and taxpayer dollars to engage in this heavy handed approach.

“For nearly five decades, this requirement – called “preclearance” – served as a potent tool for addressing inequities in our election systems,” Holder said.  “Although preclearance originated during the Civil Rights Movement – and was informed by a history of discrimination – the conduct that it was intended to address continues to this day.  Preclearance has proven to be an effective mechanism that puts on hold any new voting changes until they have been subjected to a fair, and thorough, review. This process regularly resulted in approvals for impartial voting changes.  But it also allowed the Justice Department to work with covered jurisdictions to address problems wherever they occurred – protecting the ability of all eligible citizens to participate in the process of self-governance.”

He then, as expected, played the race card. “In fact, just last year, a federal court noted the ‘vital function’ the Voting Rights Act played in protecting African American voters who would have been disproportionately impacted by a photo ID law in South Carolina.  It prompted the state to change the way its new voting statute will be implemented in future elections to eliminate what would have been a dramatic discriminatory effect.  Another court cited the Voting Rights Act in blocking a Texas congressional redistricting map that would have discriminated against Latino voters. And in that ruling, the court noted that the parties ‘provided more evidence of discriminatory intent than we have space, or need, to address here.’”

Actually, the state of South Carolina basically told Holder to take a hike. I was a poll watcher and we had people question the validity of South Carolina’s Voter ID laws. SC stood against the Obama administration. However, I further note that Holder made this about alleged “African-Americans.” First, there is no such thing. Africa is a continent, not a country and second, the majority of Americans with dark skin didn’t come from Africa, they were born on US soil. That makes them Americans.

Furthermore, it seems that Holder just can’t help but bring race into the issue. Is he not concerned for “poor white Americans” or “poor Hispanic Americans”? I think he is not.

Holder also said, “It is the responsibility of every member of this organization – and every citizen of this country – to keep defending their rights by exercising them, by registering to vote, by going to the polls on Election Day, and by casting a ballot for their preferred candidates of any political party.”

The problem with his statement is the fact that he thinks that being strict on legitimate voting is somehow infringing on voter’s rights. Nothing could be further from the truth.

Richard H. Pildes, a New York University professor who specializes in election law issues, said the move was “a dramatically significant moment in the next phase of the Voting Rights Act’s development” after the Supreme Court’s ruling.

Holder has urged Congress to reimpose the preclearance procedures generally, claiming that the DOJ’s efforts “are no substitute for legislation that will fill the void left by the Supreme Court’s decision. This issue transcends partisanship, and we must work together. We cannot allow the slow unraveling of the progress that so many, throughout history, have sacrificed so much to achieve.”

The New York Times also points out that “The department may also soon bring similar legal action against Texas over its voter identification law, which was also blocked by a federal court last year. Hours after the Supreme Court’s ruling in the Shelby County case, the state said it would begin enforcing the law.”