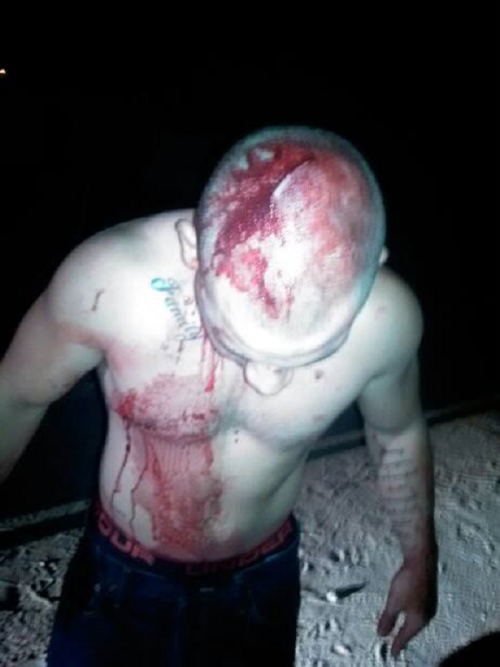 Around 2 a.m. on Sunday, July 14, 2013, mere hours after a Florida jury had delivered a verdict of “not guilty” in the trial of George Zimmerman for the second degree murder of Trayvon Martin, a “white” Marine named Steve was beaten and stabbed by a group of black males, numbering 15 to 20, in the 6000 block of Ocotillo Avenue in Twentynine Palms.

Local law enforcement has classified this vicious assault as “gang violence,” but there is every reason to call it an instance of black-on-white “hate crime.”

Aside from the racial identities of the victim (white) and his attackers (black), here’s the clincher:

The “white” Marine was accompanied by two friends, one white, one black. The white friend was assaulted first, then the thugs attacked the white Marine when he tried to help his friend. Only the black friend was spared: He was neither confronted by nor attacked by the gang of black thugs.

Here’s an account of the attack, posted by the Marine’s step-dad onSaiga-12.com, a pay membership forum. The account is republished on The Daily Sheeple. Spelling/grammatical/typing mistakes are those of the step-dad.

On the morning of the 14th (sunday) my step son, a Lance Corporal in the United States Marine Corps , was out with two other friends off base in 29 Palms CA.  One was a Marine the other a Civillian.  Steven and the other Marine are both white, and they’re mutual friend is black.  The three men observed a large group (15-20) African American males walking down the street making a lot of noise, shouting, causing a scene.  Many were carryintg weapons, ie…batons, and at least one tire iron.

The mob notices the three men sitting on the porch smoking and talking and proceeded to make they’re way up the drive.  At this point Steven, the other Marine and they’re civilian friend told them to leave.  The mob attacked the other Marine first.  Steven, seeing his friend being assaulted attempted to intervene.  Stevens black friend also stepped in demanding they stop.  The mob ignored Stevens black friend and attacked Steven instead.  They struck him in the head with a tire iron, punched him repeatedly, kicked him repeatedly and then stabbed him in the right side of his chest.  Once they had him on the ground and unconscious they continued to beat him.  The other Marine was able to get away while Steven was eventually robbed while he lay helpless and unable to defend himself.

The police did arrive along with an ambulance to transport Steven to the Desert Palms hospital where he received multiple stitches, and staples to his chest and head.  It should be noted that the mob that attacked Steven was composed entirely of black men, 15 to 20 of them.  At no time did they attack Stevens black friend.  All this took place Sunday the 14th following the George Zimmerman verdict.

Here are a couple of side notes.  I have talked to the Sheriffs Dept. and have promised on multiple occasions to have a detective call me back.  It has not happened.  My wife was able to speak to a detective Silva who stated he didn’t see this as a hate crime.  Merely gang activity.  It was 20 black men trying to murder a white man who had done nothing to warrant the aggression.  I gave the authorities information on where my sons stolen credit cards were being used and the only response we have gotten was.  ”well, it probably is not the person or persons who committed the assault.”  I am more then a little outraged.  How is this not a hate crime? Why are they trying to sweep this under the rug?  Have we fallen so far that our Service men and women must now fear for they’re own lives on native soil and not be given the treatment and respect deserved?  I wont even go into details on the treatment he received from the hospital or how they treated my wife when she called to ask about the condition of her son.  If i get any more info guys i will let you know.  I hope this helps.  Spread the word.  It appears that whites can not be victims of hate crimes only commit them.

The “Law Enforcement” is this instance is the San Bernardino Sheriffs Dept.

Steven’s step-dad then followed his account with this update:

Here is an update on my son.  After being beaten with a tire iron by a mob of 15 plus black men, stabbed in the chest and kicked unconscious and robbed, the police have absolutely no leads.  Even though his credit/debit card along with his wallet was stolen and is being used at local stores the “detectives” still have nothing.  Zero, zilch and are not returning my or my wife’s calls what so ever.  To say I’m disappointed is an understatement.  i suspect my family will get little or no justice since our son was not a minority.  This fits the criteria for attempted murder along with a hate crime.  This is not in any way acceptable.  The local sheriffs department for 29 palms is not even cooperating with the 29 Palms Provost Marshals Office.

a new update. the San Bernardino Sheriff’s Department did not collect any evidence at the scene of the crime. they did not take any photos or take his blood soaked clothing at the hospital. the detective in charge of the case said to my son that unless they solve this case in the next few days it would probably go unsolved. due to the fact that he was going on a month long vacation. We are filing multiple complaints.

Two days after the vicious attack, on July 16, 2013, a local radio stationKCDZ 107.7 FM reported that police arrested one man in “a brawl” in Twentynine Palms early Sunday shortly before 2 a.m., in which “an unidentified Marine was seriously injured when he was hit with a tire iron and then possibly stabbed.” The wounded Marine was taken to Desert Hospital in Palm Springs.

“During the course of the investigation, Melvin Peters, 23, of Twentynine Palms was arrested on multiple warrants out of Orange County and for resisting arrest and being drunk and disorderly. According to Sheriff Sergeant James Porter, the investigation is ongoing and more arrests are expected.”

Sheriff Sgt. James Porter is 5th from the left. (Source)