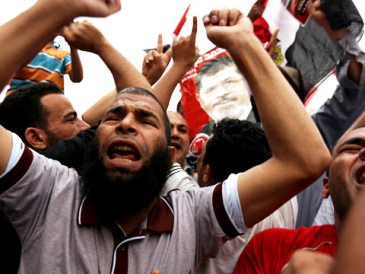 New evidence indicates that some of the pro-Morsi protesters reportedly killed by the Egyptian military, after the Muslim Brotherhood president’s ouster, were actually killed by fellow pro-Morsi protesters. They did this, according to the report, to frame the military, incite more Islamist violence and unrest, and garner sympathy from America, which has been extremely critical of the military, especially in the context of the post-Morsi violence.

One video records events on July 8, during pro-Morsi protests in front of the Republican Guard building in Cairo, where Morsi was being held, and where the bloodshed between the military and Brotherhood began.  The video shows a young man with a shaven head and a Salafi-style beard approaching the Republican Guard barrier; he gets shot, collapses to the ground, and dies—as other protesters fly into a rage against the military.  As the video plays, it seems clear that the military shot him.

However, watching the video in slow motion and in zoom clearly indicates that someone from behind him, from the pro-Morsi throng, shot him.  The whole time he falls, in slow motion, he is still facing the Republican Guard.  Yet when the camera zooms in, the bullet wound and blood are visibly at the back of his head; his front, facing the military even after he falls, does not appear to have a scratch.  Considering that the military was facing him, it seems apparent that a fellow Morsi-supporter shot him from behind.

On the same day this man in the video and others were killed, Muhammad Mahsoub, a former Brotherhood member and politician tweeted the following: “The Brotherhood sacrifice their youth in the streets, even as the sons of their leaders are at the beach resorts… Allah curse the hypocrites [based on a Koran verse];” and “I repeatedly warned al-Baltagi against his plan to antagonize the military in order to implicate it an attack on the protesters, but he insists on his plan…”

Baltagi is a Brotherhood leader who has been especially vocal about “getting back” at the military; he apparently also enjoys close relations with the widely disliked U.S. ambassador to Egypt, Anne Patterson.

Another video shown on Al Dalil is even more obvious.  An armored vehicle appears slowly driving by a group of pro-Morsi protesters, many easily discernible with their Salafi-style beards.  A shot is heard and the man nearest the passing vehicle collapses.  Again, at first, it appears that the men in the armored vehicle shot the man.

Played again in slow motion, however, it becomes apparent that the man in a gilbab (long Muslim style robe) standing directly behind the murdered man is actually the one who shot him; he then walked over to another man near him, gave him the weapon, and then quickly walked off the scene. Even the man on the roof who is taping this scene is heard to be asked, “Did the car [armored vehicle] shoot?” only to reply, “No, no.”

Even so, the desired effect of all these “human sacrifices” by the Brotherhood was accomplished: as with the other man, shot in front of the Republican Guard, many other pro-Morsi protesters rushed to the fallen man, screaming Islamic slogans and vowing relentless war on the military, as it supposedly “shot first.”

This second incident prompted the Freedom and Justice Party, the Muslim Brotherhood’s political arm, to call for “an uprising by the great people of Egypt against those trying to steal their revolution with tanks.”

To many Islamists, killing an ally to empower Islam is legitimate, especially in the context of two Islamic ideas: 1) jihad [war in the service of Islam], which in Islamic jurisprudence is considered the “pinnacle” of Islam—for its very function, from day one under Muhammad, is to make Islam supreme; and 2)  Islam’s overarching juridical idea that “necessity makes the prohibited permissible, ” which means that laudable ends, for example empowering Islam, justify the use of forbidden means.  All that matters is one’s intention, or niyya.

Thus, because making Islam supreme is the greatest priority, anything and everything that is otherwise banned—killing fellow Muslims, lying, prostitution, even sodomy—becomes permissible, so long as it is seen as a way to advance and empower Islam.

Based on their intention of empowering Islam, those who commit or promote even the most horrific crimes are exonerated, while those “sacrificed” to empower Islam—such as those pro-Morsi supporters killed by the Brotherhood—are deemed martyrs, who will achieve the highest level of paradise.  From an Islamist point of view, it’s a win-win situation.

Raymond Ibrahim is the Editor of RaymondIbrahim.com. His article first appeared at Gatestone Institute.