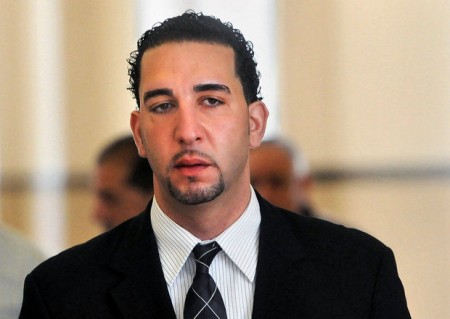 You have to hand it to these lowlives ….. no matter what they do, it’s islamophobia’s fault. He stole millions becuase he is entitled to the jizya. He got caught because of islamophobia.

Mike Ashkar said his nephews and brother have unfairly been judged by the public based on flimsy evidence.

“Everybody’s having a field day with Andy’s story,” Mike Ashkar said. “There’s no proof, but nowadays it doesn’t matter. If you’re an Arab and a Muslim, you’re guilty until proven innocent. They want to slam you right into the ground.

There’s no question but that this is another case of Islamophobia gone wrong.

The brothers’ lawyer said Wednesday they did not immediately cash in the ticket because they worried about the family’s safety in the rough neighborhood if it became know they had come into money and about the potential embarrassment in their small Palestinian Muslim community from winning at gambling, a forbidden practice.

“They don’t understand why this is happening,” Durr said. “They think everything they did made sense in their world.”

I bet. But here’s how it looks in our world.

A New York court sentenced on Tuesday Palestinian Authority Arab-American Andy Ashkar up to 25 years in jail for stealing a winning $5 million lottery ticket from its rightful owner, Robert Miles.

And the judge didn’t seem too taken with the Islamophobia excuse.

“Mr. Ashkar, let me tell you something,” Fahey said. “You exhibited some of the most rapacious greed I’ve seen in a long, long time.”

Miles has said he took the ticket in October 2006 to Green Ale Market on East Fayette Street, which Ashkar’s parents own. He said he was high on drugs the night before he tried to claim the ticket. Ashkar told him the ticket was only worth $5,000, gave him $4,000 in cash that day and took the rest as the store’s cut, Miles said.

“I sat here and I listened to you talk about the fact that you had a $150,000-a-year income from an auto dealership,” the judge told Ashkar. Fahey recalled Ashkar testifying that the huge winnings wouldn’t have made much of a difference in his life.

Assistant District Attorney Beth Van Doren asked for a sentence of 5 to 15 years in prison. She said it was only the second time in her career as a prosecutor that a judge imposed a sentence greater than the one she requested. Both times, it was Fahey, she said.

“Robert Miles could’ve been living a life of comfort,” she told Fahey in court. “Instead, he was living a life of bare essentials. This is a case of greed, pure and simple. Andy Ashkar was consumed with greed.”

Miles said he no longer uses illegal drugs. In a way, it might be better that he didn’t get his winnings in 2006, Van Doren said outside court.

“He’s in a better position to get that money and use it to do good with his life,” she said.

Instead of a tenth of it going to terrorists.