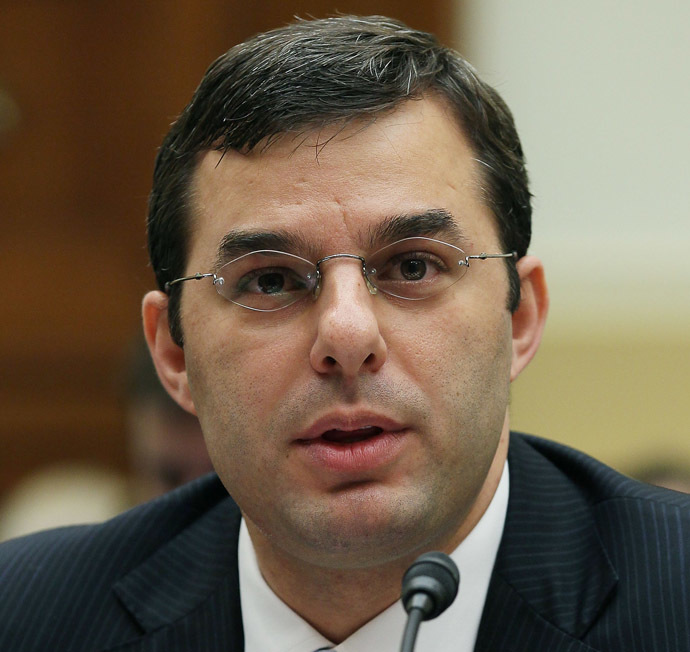 On Wednesday, The House of Representatives voted down an amendment by Rep. Justin Amash (R-MI) that would have slashed funding for the National Security Agency’s counterterrorism efforts, which have recently come under attack due to NSA whistleblower Edward Snowden’s exposing what the agency is doing in spying on American citizens’ records without a warrant. The amendment, which would have been useful to rein in NSA’s spying program on innocent Americans, was narrowly defeated 217-205.

Not only the White House, but also Republicans and Democrats alike opposed the amendment, while there was bi-partisan support for it.

Amash defended the amendment by pointing to the Fourth Amendment, saying that the NSA was violating it by conducting unreasonable searches and seizures, many of which are done without warrant or probably cause.

There was only one question members ought to ask themselves, said Mr. Amash, one of the measure’s sponsors, “Do we approve the suspicionless collection of every American’s phone records?”

“The secret [Foreign Intelligence Surveillance Act] courts have expanded the meaning of the Patriot Act to allow them to go after everyone’s records,” Amash said. “All my amendment would do is return the Patriot Act to its original Intent.”

However, NSA officials and others say that the agency goes through regular legal channels to obtain the content of calls of American citizens. Fourth Amendment protections do not apply to foreign nationals, most legal authorities say.

He left after taking a single question from the press.

“I call it jokingly the wing nut coalition,” Labrador said in discussing those who support the amendment. “Justin is the chief wing nut.”

Each of the lawmakers said that they were mainly backing the measure because their constituents are outraged and scared of the NSA’s monitoring program, which has been the subject of much speculation and rumors since it was publicly disclosed by whistleblower Edward Snowden.

Michele Bachmann (R-MN) was the only vocal opposition calling Amash’s amendment dangerous. “We need to win the war on terror and defeat the goals and aims of Islamic jihad and for that reason I will be voting no on Representative Amash’s amendment…. Individuals do not own the records, the records to not belong to the individual. There’s no Fourth Amendment expectation of privacy on right to the business records exception.”

Bachmann noted that legally “there is no expectation of privacy” when the government requests to see a business’ internal records, which is what NSA does.

Bachmann then attempted to pull the Boston bombing into the mix, stating that if the amendment were approved, Congress will have denied “the U.S. the capability in real time, in the quick time that we need to have, to be able to find linkages to help us in pursue terrorists such as those who bombed the Boston Marathon.”

Hang on just a moment! No one found either of the Tsarnaev’s to stop them from allegedly carrying out the bombing. In fact, one of the brothers was interviewed by the feds a couple of years before the bombing and nothing was done. Furthermore, even with NSA surveillance, they did nothing to stop the bombing. This argumentation actually works against Bachmann.

Judge Andrew Napolitano would argue against Bachmann’s view of privacy and he would point to the term “security” in the Fourth Amendment. However, while Bachmann may be technically correct about phone records being the property of the phone company, the reality is those records are about a person’s activity, which one should guard. Will she also defend the government going to your doctor and demanding your health records without warrant simply because the records are the property of the doctor and not you personally? I really question if she would take that approach, but it is the same logic.

Amash took to Facebook to inform his constituents of the vote, as he always does concerning his own votes, writing “We came close (205-217). If just seven Representatives had switched their votes, we would have succeeded. Thank YOU for making a difference. We fight on to defend liberty.”

The House did pass one amendment to cut off all U.S. military aid to Egypt.

One thing I found curious is the opposition to the Amash amendment says the NSA’s Prism tool is a tool that is valuable in stopping terrorism, but in the next breath claims that the NSA does not collect individual phone records or billing statements. Rather, they claim American identities are protected. Well, hold on, if identities are protected and we can assume they want us to believe they are “unknown,” then how are they actually stopping anything? How can they, if identities are “protected.” I don’t know about you, but my BS meter is spiking.

Here’s the list of representatives who voted against the amendment and put their support behind Big Brother snooping, all in the name of the “war on terror.” If you need it, click here to find and contact your representative.