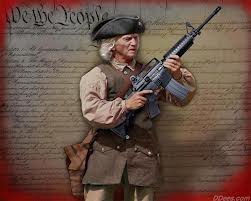 The United States is the battleground for what will be the most violent and bloody war the world has ever seen. Although it is just beginning, it is likely to gradually become much more violent. Sounds melodramatic, doesn’t it? I would think so too, if I didn’t know better.

Since the Zimmerman verdict, Barack Obama and his race baiting friends have done everything they can to stir up the races against one another. It hasn’t worked so far, but they are far from done. Small occurrences of blacks attacking and even killing whites who have Zimmerman bumper stickers or other visible forms of support for him, are being reported.

Criminal racist, Sheila Jackson Lee, introduced a bill in Congress that denies funding to the 24 states who currently have “stand your ground” laws. While we can legally defend ourselves in all 50 states, stand your ground simply allows you to fight back without first retreating. Last week Obama said that it was time to look into and change the stand your ground laws, even though Zimmerman, nor his lawyers, ever used it in his defense. Why? Because they want to bring us one step closer to complete disarmament, and total helplessness when the violence does increase.

The internet is ablaze with rumors and reports of the government’s plans to make war against American citizens. While some of the rumors are just hype, others are not. Cities all over America are reporting helicopters firing blanks over their homes. In February Houston and Galveston were “battlegrounds” for these urban warfare training exercises. When city officials or the media ask the military questions about it they either ignore or lie to them. They do these maneuvers over rural areas with small communities, as well. I live in a little East Texas town outside of Houston where a few months ago I watched helicopter maneuvers by my daughter’s house. By then it had been going on every night for two weeks.

New military supply depots are popping up in large cities. In the past couple of years Houston has built several of them. They keep trucks, heavy equipment, and miscellaneous supplies there. The Posse Comitatus Act, a law passed in 1878 which limits the powers of Federal government’s use of military on US soil, has been trampled so thoroughly that it is virtually nonexistent.

Anyone with a television or internet has seen the flood of familiar pictures of S.W.A.T. teams in riot gear slipping up on people’s homes for various reasons. We are being desensitized to the presence of large numbers of police in black riot gear on our streets. They don’t knock on your door and ask to talk to you anymore. They smash your door in with a battering ram, throw you on the floor, cuff your hands behind your back, put you on display on your knees for all your neighbors to stare at, search your house, and then finally tell you why they are there.

Just a few days ago the U.S. Marshall’s Service raided a Sarasota, FL nurse’s home where she experienced their usual gentle treatment. It turned out they were at the wrong apartment. The stupidest part about it was they couldn’t understand why she was upset and ran for her gun. After all, she had the audacity to be standing at her own kitchen sink washing dishes when she saw a man pointing a gun at her through the window. The Marshall’s biggest concern after they removed her cuffs, and they generously chose not to press charges against her for pulling out her gun, was that she told the press.

Thanks to Barack Obama, the lines between the police and the military are being blurred. This is common in a police state, but not in a free one. Gone are the days when the police officer knocked on your door and asked you questions like you were a free citizen with rights. Now you are guilty until proven innocent, and even then they want you to keep your mouth shut and not make waves for the nice policeman who body slams you on the ground.

The use of military on US soil is becoming more frequent, and it is bound to increase more and more since The National Defense Authorization Act has declared the United States part of the battlefield. As an official battlefield, it just makes sense that the military would be used to police us. Not long ago members of the military were asked if they would fire on Americans citizens. Many said no. Obama is purging the high ranking officers who refuse to kill us. Government agents who once trained using posters of enemy combatants are now shooting at posters of women and children. This is done to desensitize them and make them willing to shoot civilians.

Harry Reid and Barack Obama will move heaven and earth to force gun control laws into the states against the will of a majority of Americans. They continue to lie and tell us that 90% of Americans want gun control. It is imperative to them that they disarm us for their plans to succeed. In fact, Obama is working diligently to remove all weapons from all Americans, and completely eliminate the Second Amendment.

The Zimmerman trial is just one of the political tools he is using to destroy what’s left of our nation. They were disappointed that truth trumped over sensationalism, and the jury saw through all the fanfare and lies surrounding the case. They are salvaging what they can; however, and using the “poor little black boy” routine to push their agenda into every city through Blockbusting. This is essentially a forced desegregation of white, middle class neighborhoods. This gives them a powerful voting bloc in predominately conservative areas and forces their class warfare into Everytown, USA.

How long are we going to watch them take away our freedoms? It wasn’t that long ago that they had to slip their criminal changes into our laws gradually. Now, something is introduced or exposed every day that chips away at our Constitutional rights, and at our expectation of those rights, as well. America is one giant Petri dish. Right now backroom deals are a large part of our battle. Which RINO is going to reveal their true colors and vote against Americans today? How many RINOs will Obama have to buy dinner to get his latest shady deal through Congress or the Senate? How long can John Boehner pretend to stand up against the tide of illegal moves before he caves and gives them what they want? How long will we put up with it? Nobody knows. Americans are getting fed up. I just hope some of the changes start taking place for our side soon, because if they don’t it won’t be a war, it will be genocide.