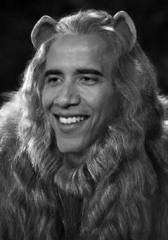 The Wimpette in Chief has decided that he doesn’t have the courage to face opposition to his dictatorship.  When he now gives speeches, conservatives need not apply.  Obama has channeled his inner Bert Lahr, the cowardly lion from the Wizard of Oz.  He has seen the opposition and he ran like a schoolgirl under the guise that his life was in danger.

Never before in the history of this nation has an American president been such a complete loser that he could not stand up and defend his policies.  Of course no president before has ever had such incredibly idiotic and corrupt policies as the Ballerina in Chief who now occupies the Oval office, or as it is now known, The Little Girl’s Room.

Obama was at the University of Central Missouri, when he wet his panties thinking about facing students who don’t consider him a god.  The problem is he didn’t have Michelle with him for protection.  He is a disgrace to the office he holds and to the country he has destroyed.  And even if he did ever develop courage, it would do him no good because he would still be minus a heart and a brain and the Wizard has nothing left in his sack to give him.

It should have been expected though, as all despots who would be dictators have never been able to confront those who see them for what they are.