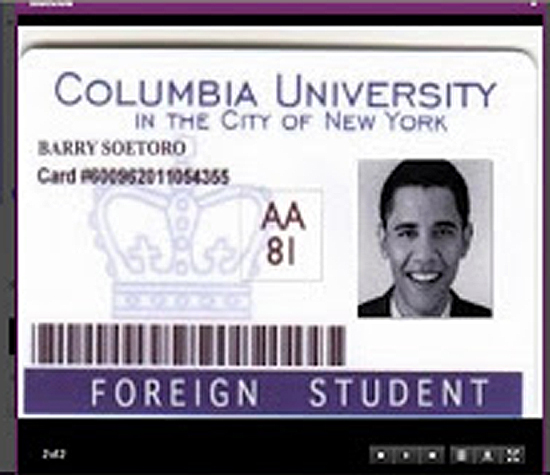 A week ago, on July 20, 2013, I did a post on the curious fact that although Barack Obama is registered to vote in Chicago — and indeed, he did early vote at a Chicago precinct last November — a Barry Soetoro, with the same birthdate as Obama (August 4, 1961) and with the White House’s zip code (20500) is registered to vote as a Democrat in Washington, D.C.

The date of that voter registration was October 15, 2012 — 22 days before the pivotal November 6 elections.

I explained that “Barry Soetoro” was young Obama’s name when he was adopted by Obama’s mother’s (Stanley Ann Dunham) second husband, the Indonesian Lolo Soetoro.

Lolo Soetoro and Stanley Ann Dunham were married on March 15, 1965, when little Barry was 4 years old. In 1967, when Barry was 6 years old, he and his mother joined Lolo in Indonesia. Barry lived in Indonesia from ages 6 to 10. In 1971, 10-year-old Barry was sent back to Honolulu to live with his maternal grandparents; Barry’s mom remained in Indonesia. The marriage between Dunham and Soetoro ended in 1980. (Source)

There is no record anywhere of Obama having changed his name from “Barry Soetoro” back to Barack Hussein Obama Jr.

When I accessed the D.C. Board of Elections website on July 20, I took a screenshot of what I found so as to preserve evidence of what I’d found in case the information is scrubbed from the site. The screenshot shows the time and date on my laptop computer when I accessed Barry Soetoro’s voter registration information:

I also invited readers to repeat the steps I had taken to verify Barry Soetoro’s voter registration for yourself. Here’s how:

1. Go to the website of the District of Columbia Board of Elections. Click here or go to: https://www.dcboee.org/voter_info/reg_status/.

2. Type in the first name: Barry; and the last name: Soetoro.

3. Type in the birth date of August 4, 1961 — Barack Obama’s birthdate,according to the White House’s website.

4. Type in the zip code 20500, the zip code for the White House at 1600 Pennsylvania Ave, Washington, DC, according to whitehouse.gov.

Well, today, I decided to do the search again.

So I  went on the D.C. Board of Elections and Ethics website and repeated the search for “Barry Soetoro,” and — SURPRISE, SURPRISE! – got this message:

Here’s a screenshot I took, showing the time and date when I did the search:

Sonoran News sent a Freedom of Information Act (FOIA) request to the D.C. Board of Elections and Ethics (DCBEE) director asking for a copy of the voter registration, if Soetoro voted in the Nov. 6, 2012 election, and what the process is for verifying voter registrations submitted by mail and online. This is the response from Senior Staff Attorney Terri Stroud at the DCBEE Office of the General Counsel:

“I am writing to acknowledge the receipt of your Freedom of Information Act (FOIA) request dated July 22, 2013.  In accordance with D.C. Official Code § 2-532(c), I will either make the documents you have requested, or a legally segregable portion thereof, available to you, or notify you of my determination not to make the requested documents available, on or before Monday, August 12, 2013, which is the 15th business day after the date upon which I received your request.”

As Yogi Berra would say, this is déja vu all over again.