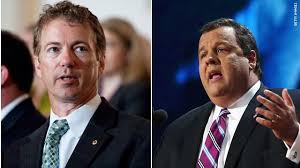 New Jersey Governor Chris Christie ripped into libertarians, and specifically named Senator Rand Paul (R-KY) for challenging government surveillance programs and failing to understand the dangers of terrorism. While there is a real danger that threatens us from jihadists, apparently Chris Christie doesn’t understand the dangers of tyrannical government.

“This strain of libertarianism that’s going through parties right now and making big headlines I think is a very dangerous thought,” the New Jersey GOP governor said on Thursday at a Republican governors forum in Aspen, Colo. “You can name any number of people and (Paul is) one of them.”

“These esoteric, intellectual debates — I want them to come to New Jersey and sit across from the widows and the orphans and have that conversation. And they won’t, because that’s a much tougher conversation to have,” Christie said.

“The next attack that comes, that kills thousands of Americans as a result, people are going to be looking back on the people having this intellectual debate and wondering whether they put …” Christie added.

“If Gov. Christie believes the constitutional rights and the privacy of all Americans is ‘esoteric’, he either needs a new dictionary, or he needs to talk to more Americans, because a great number of them are concerned about the dramatic overreach of our government in recent years,” Doug Stafford, a senior adviser to Paul, told Politico.

“Defending America and fighting terrorism is the concern of all Americans, especially Sen. Paul. But it can and must be done in keeping with our Constitution and while protecting the freedoms that make America exceptional.”

“Defending America and fighting terrorism is the concern of all Americans, especially Senator Paul,” Stafford added. “But it can and must be done in keeping with our Constitution and while protecting the freedoms that make America exceptional.”

However, Paul didn’t allow just his spokesman to speak on his behalf. He took to twitter on Friday to blast the New Jersey governor saying that he what he was really worried about was freedom.

He then added that Christie should get out and actually listen to real Americans.

Chris (Crist)ie should hear from more Americans who value both security and privacy.

While some are saying Christie is a potential 2016 presidential candidate, I frankly this he doesn’t have a prayer, especially after his little Hurricane Sandy song and dance just before the 2012 elections. I’m not the only one who thinks that either. According to the Washington Times:

“Coming from the one person most responsible for the re-election of Barack Obama, I think we can take what Christie said with a grain of salt,” Mr. Devine said. “He will be the Jon Huntsman of 2016 if he enters the Republican presidential nomination race.”

And Mr. Stafford employed a shot of irony in hitting back at Mr. Christie, quoting the lyrics of New Jersey favorite son Bruce Springsteen: ”In the words of the governor’s favorite lyricist, ‘You know that flag flying over the courthouse? Means certain things are set in stone: Who we are, what we’ll do and what we won’t.’”