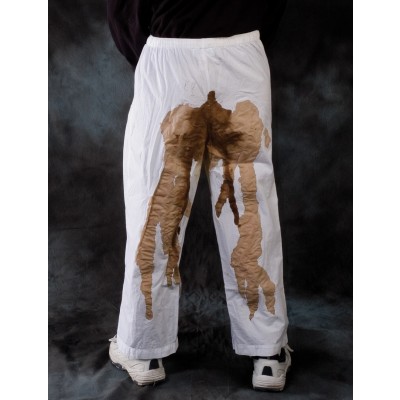 Wow! You think the laws are tough in your home state? It would appear that the great state of Maine has adopted a zero tolerance policy toward crapping your pants in public, or at least at a public courthouse. 50-year-old Ronald Strong had an accident, no it was not intentional, and ended up serving time for it. This story is bizarre. This story is somewhat funny. But it is also a microcosm of something very wrong with this country. They will throw you in jail for anything in the United States.

Here’s a quick fact from the ACLU:

If we are going to throw people in jail for accidentally making number 2 in a public place then it is no wonder those numbers are so out of line. Is this truly the land of the free?

People with loose bowels, beware. Anyone who doesn’t fully trust the integrity of their gastrointestinal system would be well-advised to stay far away from federal buildings. (Also, anyone squeamish about fecal matters — or eating lunch — may want to proceed with caution as they read this.)

The 1st U.S. Circuit Court of Appeals last week upheld a conviction against a Maine man who served a seven-day jail sentence for willfully damaging and creating a hazard and nuisance in the federal courthouse in Portland. Specifically, he pooped his pants and then left a mess in the bathroom after attempting to clean himself up.

And what a mess. The poor maintenance worker who had to deal with it said that “seventy-five percent of the floor was covered in feces” while more was “smeared more than two feet up on the walls” and “on the paper towel and toilet paper dispensers, on the toilet paper itself, and on part of the toilet seat and the left side of the toilet bowl,” according to the opinion.

The outrageously graphic 57-page court document, written by distinguished judges who sit one level below the U.S. Supreme Court, includes vivid comparisons to spaghetti with meat sauce and chunky peanut butter. There are also photos of the bathroom where the crime took place, though mercifully after it had already been cleaned.

So what went wrong? Ronald Strong, who said he was 50 at the time and had a heart condition that required medication that may have affected his bowel control, arrived at the courthouse on business for an unrelated civil case. As he was being screened by security, he informed the guard that he had to use the bathroom, and then that he was defecating in his pants. The guard escorted him to the restroom “with Strong intermittently trailing feces on the floor” which he later described as “liquid and there was pieces in it” that dripped down his leg “all the way to my ankles.”

Once safe in the bathroom, he took his clothes off, cleaned up the best he could, throwing his boxers away because they were destroyed: “I mean, how could I carry them home?” he testified. “What was I going to put them in? I mean, it was covered in feces, there was — I mean, what was – I mean, I had my briefcase, I mean, what was I supposed to do with them? I threw them in the trash.”

So technically Ronald Strong did not get sentenced for dropping a deuce but more so because he didn’t adequately clean up the mess. But please put yourself in his situation for a moment. Can you imagine the frenzied state of being due in court or for an important meeting and accidentally messing yourself shortly before your appointment?

Strong points out, “I stood up again and I kept wiping myself and then I sat down to put my socks back on. I didn’t have any boxers at that time, so I put my socks back on. I put my jeans back on, you know, I’ve been – I don’t know if you’ve ever had an incident in the kitchen where you have something spill or something, you’re grabbing everything and anything trying to mop up milk or — I don’t know if you’ve ever spilled spaghetti sauce and there’s meat, you’re trying to get it up as quick as you can. And that’s – basically it was just like this frenetic pace, but it was repulsive, I mean, the smell was — and I was embarrassed, I mean, here I had used the bathroom in my pants, a 50-year-old man and I was in a federal courthouse. It was very, very embarrassing.”

Beyond that, I can not personally imagine the level of projectile poo poo that this man left in his devastating path of destruction. It must have been pretty bad to have landed him for a week in jail, but…

The man has suffered enough with his name in print all over the internet and having to explain to other inmates how he got there. I really hate to print this story in a way but it is important. It’s important to the extent that we live in a society that is not “the land of the free” anymore. People are being locked up for some really stupid sh*t (pun intended).

Since I dared print Ronald Strong’s story I will give you my own. I was around 10-12 years old at the time. I was with my best friend Jay at an amusement park called Worlds of Fun in Kansas City. I had to pee and I had to pee bad.

The problem was that Jay was all about the peer pressure. One more ride Dean.

OK, fair enough. Well for anyone who frequents amusement parks you must understand how long the lines can be. When you add to that the fact that we had the one more ride conversation 2-3 times it was a disaster waiting to happen.

The damn burst. I ran frantically and jumped into a faux moat that surrounded a riverboat. The people around probably thought I was crazy. I’m sure they thought I was a dumb kid. Guilty as charged.

Jay knew that I had pissed my pants. No one could really prove it other than Jay. I was now wet from the waist down and it was a combination of yellow nature and green dyed synthetically enhanced water that would probably kill fish, frogs and ducks.

Accidents happen my friends. I peed myself twice in bed as an adult when I was in my 30s. It’s embarrassing and it can happen to the best of us.

Just don’t let it happen in Maine. If Ronald Strong happens to have an accident again I may be following up to tell you that he has been sentenced to five years in prison.

It would pay to do some research into the “Sharting Laws” in your own community. It might keep your name out of the paper and off of post office walls.  Since when is it a crime not to be able to take the browns all the way to the super bowl?