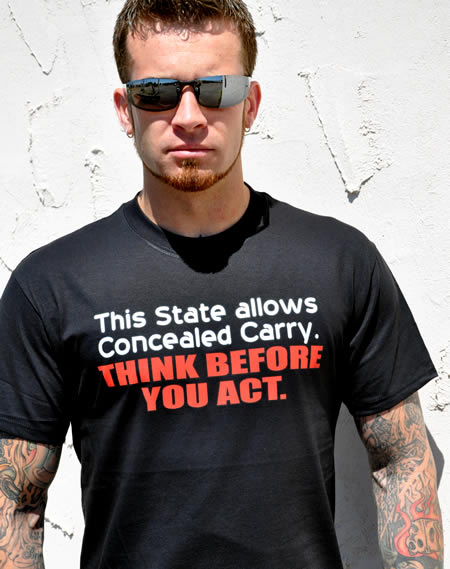 This is one of those movements that are in the right direction, though one does wonder how those who have met the requirements to carry concealed were not allowed to carry their weapons in bars and colleges in the first place. However, a new law went into effect on Friday in North Carolina which allows residents in the state with a carry permit to take their firearms into restaurants that serve alcohol, bars, playgrounds and even colleges! You know the gun grabbers are going to be beside themselves on this one, but keep an eye on statistics. I’m sure they will prove this is a step in the right direction.

Amazing enough, the new law (HB937) takes 17 pages to explain! The bill passed earlier in the week and Republican Governor Pat McCrory (Don’t think for a moment that this guy isn’t a RINO, because he is) signed the bill into law. To prove my case about McCrory, listen to how he defended his decision with typical liberal talk about “the children.”

“I just want to make sure that kids are safe,” McCrory said in December, according to WRAL. “The long-term solution I think is not changing any current laws — we’ve got a lot of laws on the books — but taking care of those people who have some serious, serious problems in their minds. I think that’s where a lot of the concentration needs to be. Because if you look at all these incidents throughout the nation, it’s been these loners that have some serious, serious issues. I think that’s the thing we’ve got to concentrate on.”

Then Mr. McCrory, stop infringing on their parents’ rights and abilities to defend them! While I agree that the shootings we have seen, at least in how they are reported have been from loners, but that doesn’t mean you treat every citizen as if they fall into that category.

Before passing the final law, the state legislature dismissed a controversial provision which aimed to repeal a law requiring a permit and background check from a county sheriff in order to purchase a handgun. As I said parts of the law are a step in the right direction and others, not so much.

So what all does the new law allow for my neighbors to the north? When you go out to a bar or a restaurant serving alcohol, you no longer have to go in defenseless, unless the owner specifically prohibits it. In that case, you can do like I do and take it in anyway and then if they discover you have a firearm, they will merely ask you to leave, which you should do so and never darken the doors of their establishment again.

The problem with entering establishments serving alcohol is that you cannot consume any! Really, it’s utterly ridiculous to have such a law as this, as it does nothing but restrict your freedom to eat and drink as you please. After all, you are a law abiding citizen. Do lawmakers seriously think you are going to take your wife out for a nice meal and get hammered in the process and shoot the place up? If they do, perhaps they don’t need to be making decisions.

You can also take your weapons to public recreation areas, parade grounds and funeral processions. I’m not sure why they would have been off limits to law abiding citizens in the first place.

Gun owners will now also be allowed to store their guns in a locked vehicle on public-school or university campuses or any other state-government parking lot. OK, at least the gun made it onto the campus grounds, but it’s not doing very much good sitting in your car when a shooter enters your classroom is it? Exactly, another bad part of the law here.

I would say the University of North Carolina Police chiefs at least made a good point in their opposition to this part of the law, citing the potential increase of car break-ins on campus. However, I don’t think that their claim of it leading to increased gun violence holds water. That is already in effect with them not allowing people to actually carry on campus to defend themselves.

Oh, and about the liberal gun grabbers being beside themselves? One MSNBC reporter actually said, “Really wish you could take a gun with you on your next visit to the public playground with your kids? Then you might want to consider a move to North Carolina.”

Ah yes, make it look like law abiding citizens want to murder innocent young children on a playground. Obviously parents want to carry their firearms in such places to defend their children against anyone that would seek to do them harm.

Finally, understanding that North Carolina’s constitution doesn’t have what several states have and that is a similar wording of not infringing on the right to bear arms, this is would account for the state infringing on your rights, abilities, even duties to bear arms to defend yourself. For the NC constitution reads:

That the people have a right to bear arms, for the defence of the State; and, as standing armies, in time of peace, are dangerous to liberty, they ought not to be kept up; and that the military should be kept under strict subordination to, and governed by, the civil power.

In other words you have a right to bear arms to defend the State, but that doesn’t mean the State can’t infringe upon those rights.

As I said, some measures in the new law are good and some not so good, but it seems that there were at least some positive steps in the right direction.