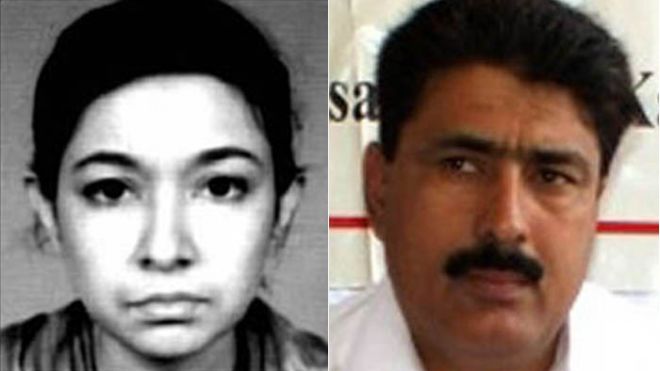 Shakil Afridi is a hero. If Pakistan were really our ally, he would not be in prison today. And Obama should be pressing them to release him for nothing. As soon as they send this jihad terrorist Muslima back to Pakistan, she will walk free.

Pakistan is preparing a proposal to swap the doctor who helped the CIA pinpoint Usama bin Laden for a notorious female neuroscientist and suspected Al Qaeda operative being held at a federal prison in Texas, FoxNews.com has learned.

The exchange would involve Dr. Shakil Afridi, the pro-America doctor whose vaccination ruse helped establish the terror kingpin’s presence in an Abbottabad compound prior to the Navy SEAL raid that killed him, and Dr. Aafia Siddiqui. Siddiqui is a U.S.-trained neurosurgeon who left Massachusetts after 9/11 and resurfaced in Afghanistan where she was arrested for trying to kill U.S. soldiers.

Khalid Sheikh Muhammed told U.S. authorities Siddiqui was an Al Qaeda courier and operative. A State Department spokesman acknowledged that Pakistan has been eager to get Siddiqui extradited, but said no deal is in the works.

“The government of Pakistan requested her transfer to Pakistan in 2010,” spokesman Patrick Ventrell said. “However we are not aware of a recent request from Pakistan to discuss her case, nor the case of Afridi.”

Siddiqui is currently serving a sentence of 86 years at a maximum security prison in Fort Worth, Texas. She has denied the charges and role with Al Qaeda.

A Pakistani Interior Ministry official who requested anonymity told FoxNews.com the prisoner exchange is still being drafted. The official said it would take at least a month before the newly formed task force constituted by Pakistan’s Interior Minister Chaudhry Nisar Ali Khan can finalize an agreement to present to the Obama administration and discuss the terms of a deal.

Though a formal extradition agreement between Pakistan and U.S. does not exist, former Pakistani President Pervaiz Musharraf has been accused of secretly handing over several alleged terrorists during his nine-year term.

A Pakistani TV network claims to possess confidential documents in which the U.S. demands that Pakistan admit Siddiqui is a terrorist and that the sentence she was given in the U.S. was justified. Such declarations, if actually requested, would be key to any potential swap to assure she serve the remainder of her sentence in Pakistan.

However, reports in Pakistan say the government there is reluctant to release Afridi, especially without the U.S. acknowledging what Pakistani officials say is his illegal conduct. He was sentenced by a tribal court to 33 years in jail without the possibility of bail on widely disputed charges of colluding with terrorists.

Imran Khan, a cricket legend-turned politician whose PTI political party has autonomy in northwest Pakistan, said that in order for a prisoner swap to work there must be a mutual agreement to label prisoners ‘terrorists’ or ‘traitors,’ calling Afridi a “collaborator of illegal U.S. activities in Pakistan.”