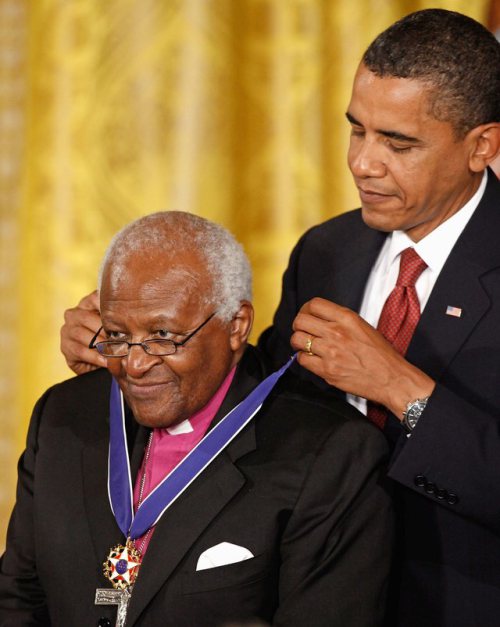 “Better to reign in Hell, than serve in Heav’n.” John Milton, Paradise Lost.

Cheryl K. Chumley reports for The Washington Times that yesterday, July 26, 2013, South Africa’s retired Anglican archbishop, Desmond Tutu, denounced religions that “discriminate against gays” and declared that if he had his pick, he’d go to hell before heading to a heaven that condemned homosexuality as sin.

Agence France-Presse reports that during the United Nations’ launch of its  homosexual “rights” campaign in Cape Town, Tutu, the recipient of much praise and accolades across the world, including a (worthless) Nobel Peace Prize and a U.S. Medal of Freedom, said:

“I would not worship a God who is homophobic and that is how deeply I feel about this.I would refuse to go to a homophobic heaven. No, I would say sorry, I mean I would much rather go to the other place.”

Tutu also likened equal rights for gays to the fight for equal rights for blacks, saying “I am as passionate about this campaign as I ever was about apartheid. For me, it is at the same level.”

Tutu is some “Christian” archbishop.

In 1994, Tutu said abortion was acceptable in a number of situations, such as incest and rape. In 1996, he supported the full legalization of abortion in South Africa, despite some “personal reservations.”

Given that Tutu is 81 years old, no doubt it won’t be long before he gets his wish.

At which time, Tutu will join Obama’s ideological mentor, Saul Alinsky, who wrote the book on  communist agitating, Rules For Radicals,which he’d dedicated to Satan.

Alinsky dedicated his book, Rules for Radicals, to Lucifer

Alinsky so admired Lucifer he wanted to join Satan in Hell.

In a 1972 Playboy magazine interview, in answer to the question “Do you believe in any kind of afterlife?,” Alinsky said: ” if there is an afterlife, and I have anything to say about it, I will unreservedly choose to go to hell. Hell would be heaven for me. All my life I’ve been with the have-nots. Over here, if you’re a have-not, you’re short of dough. If you’re a have-not in hell, you’re short of virtue. Once I get into hell, I’ll start organizing the have-nots over there. They’re my kind of people.“

Saul Alinsky died a few months after the interview, on June 12, 1972, and no doubt got his wish.