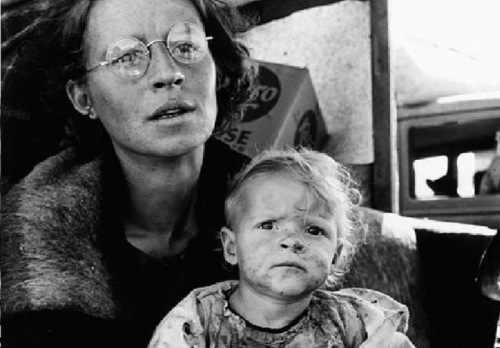 The propaganda from the  State Controlled Media about an economic “recovery” is just that — propaganda.

We’re not even in an economic recession any more. America is in a second Great Depression.

Just because we don’t see soup lines like in the first Great Depression doesn’t mean we’re not in one. For that matter, it was liberal economistPaul Krugman who, a year ago, had said America is in an economic depression. He said then that the reason we don’t see soup lines is because the poor today get their welfare in the form of checks and ATM cards. They don’t have to stand in line for food, and so government welfare has made the Second Great Depression invisible.

And the face of the Second Great Depression increasingly is white.

According to an article by the Associated Press, titled “Signs of Declining Economic Security,” survey data “exclusive” to the AP show that a shocking 4 out of 5 U.S. adults are jobless, near poverty, or rely on welfare for at least parts of their lives.

Economic hardship is particularly on the rise among “white” Americans, their pessimism about their families’ economic futures at the highest point since at least 1987. In the most recent AP-GfK poll, a majority of whites (63%) call the economy “poor.”

Measured across all races, the risk of economic insecurity rises to 79%, which means as many as 4 out of every 5 U.S. adults are jobless, or living near poverty, or dependent on welfare.

If those trends continue, by 2030, close to 85% of all working-age adults in the U.S. will experience bouts of economic insecurity.

The reason why we know less about struggling white Americans is because they are “the invisible poor.” Unlike racial minorities who tend to live in big cities like Detroit and Chicago, lower-income whites are generally dispersed in suburbs and small rural towns – in Appalachia, the industrial Midwest, and across the heartland — wheremore than 60% of the poor are white.

William Julius Wilson, a Harvard professor who specializes in race and poverty, noted that despite continuing economic difficulties, minorities have more optimism about the future after Obama’s election, while struggling whites do not. Wilson warns, “There is the real possibility that white alienation will increase if steps are not taken to highlight and address inequality on a broad front.”

Here are some more of the AP survey findings: