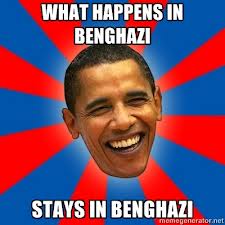 In another demonstration of the not so “phony” scandal called Benghazi, we are discovering that Diplomatic Security Agent David Ubben fought alongside former Navy SEALs Tyrone Woods and Glen Doherty to protect the diplomatic mission that came under attack on September 11, 2012 in Benghazi, Libya. As he did, he was injured and said he had to wait 20 hours for help with a shredded leg.

According to Fox News, David Ubben waited for twenty hours after he was hit on that rooftop with Tyrone Woods and Glenn Doherty. His leg was shredded. We know that he has been recovering for ten months at Walter Reed as Catherine has just reported. He was defending the US consulate and then no medical aircraft was apparently sent to this scene to get him out of there.

How could this be?

It’s because the Commander-in-Chief was more engaged in CYA tactics and cover-up than he was in doing his job.

Ubben ran into the consulate to help recover the body of information management officer Sean Smith, and then fought alongside the two SEALS in an attempt to fight off the jihadist attack.

Mortar attacks eventually hit Woods and Doherty and one of those attacks shredded Ubben’s leg.

Ubben’s testimony would be crucial in understanding exactly what took place that evening. Congress is hoping that he will have recovered enough to testify as he was one of the only survivors to have witnessed both waves of attacks in Benghazi on September 11; the first at the consulate and the second at the CIA compound.

Catherin Herridge told Fox that source have confirmed that Ubben is a survivor and that all the details above did come from him.

Ubbens’ injuries were so severe that he is still undergoing treatment at Walter Reed Medical Center. Ubben was one of four State Department employees who were injured in the attack.

Those who know Ubben say the response on that night was “inadequate on many levels.”

Rep. Louis Gohmert (R-TX) said that a medical plane was not sent for those injured. He would not confirm if that information came from Ubben or not, but by his response, it does seem that Ubben was the source of that information.

“A medical plane has a door big enough to get somebody on a gurney through it without turning them sideways,” said Gohmert. “We owed our people better than they got.”

The State Department’s independent review doesn’t list a medical plane being sent either nor was it mentioned by former State Secretary Hillary Clinton or former Defense Secretary Leon Panetta.

So not only did Barack Obama leave Americans to die, but then his administration did nothing to send medical care in immediately to help those who were wounded. Again, this is a clear dereliction of duty on Obama, Clinton, and Panetta’s part.

Ubben is among several Benghazi survivors who have yet to testify. Many have already been forced to sign non-disclosure agreements by the Obama administration. What will we learn once their testimony is made public? Furthermore, how long will it take Congress to get a move on in dealing with the actions, or more appropriately, inactions of the Obama administration? We’ll wait and see. Meanwhile, continue to pressure your representatives and senators to get to the bottom of this and administer justice.