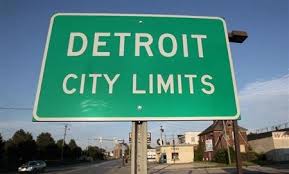 In a Sunday New York Times piece, Monica Davey and Abby Goodnough indicated that the Affordable Health Care Act (Obamacare) is a key component of Detroit’s bankruptcy plan to bail out Democrat controlled cities and corrupt public employee unions. In other words, Barack Obama is bailing out Detroit and he’s going to use American tax dollars to do it through Obamacare.

As Detroit enters the federal bankruptcy process, the city is proposing a controversial plan for paring some of the $5.7 billion it owes in retiree health costs: pushing many of those too young to qualify for Medicare out of city-run coverage and into the new insurance markets that will soon be operating under the Obama health care law.

Officials say the plan would be part of a broader effort to save Detroit tens of millions of dollars in health costs each year, a major element in a restructuring package that must be approved by a bankruptcy judge. It is being watched closely by municipal leaders around the nation, many of whom complain of mounting, unsustainable prices for the health care promised to retired city workers.

Similar proposals that could shift public sector retirees into the new insurance markets, called exchanges, are already being planned or contemplated in places like Chicago; Sheboygan County, Wis.; and Stockton, Calif. While large employers that eliminate health benefits for full-time workers can be penalized under the health care law, retirees are a different matter.

Detroit has been mishandling public funds for decades and writing checks its government cannot cash, promising high pensions, fully funded health care plans and pay raises for its employees, but unable to deliver. That is most evident in its recent claim of bankruptcy.

However, they’ve now found a way to put their burdensome promises on the backs of the American taxpayers….nationwide.

Is that even legal? Yes, it’s legal. Is it lawful? Not if you are one that adheres to the law of God, it’s not.

Kate Andrews elaborates, “Obamacare has been designed to allow blue cities like Detroit to over-spend on behalf of the public sector and then divert the cost to the American taxpayer, who has no vote or control over the city’s financial decisions.”

“Detroit is not the only city to propose such a controversial plan,” she continues. “Other blue cities, like Chicago, have proposed similar plans to divert city-run health care coverage over to Obamacare; and more cities are likely to follow. A recent Pew Charitable Trust study discovered that 61 of the country’s leading cities have made a combined promise of $126.2 billion worth of retiree health coverage to their public sector workers, yet only 6% of this cost is funded.”

While both Democrats and Republicans have been crying about the escalating financial and economic burden of Obamacare, there is no doubt that piling on city debt to Obamacare will increase the costs even more.

It gets even worse. According to the Pew study:

A number of cities have allowed workers to include overtime, unused sick leave, or unused vacation time to boost or “spike” final average salary—a figure generally used to establish the level of benefits. Late-career promotions also can increase salaries just months before retirement.

Joe Estep, Charleston’s finance director, tells the story of a 50-year-old police lieutenant who retired in 2009 after 24 years of service. In his final three years, the lieutenant earned enough overtime to raise his salary from a base of $49,000 to a three-year average of $78,000. The extra earnings boosted his pension from $33,000 to $53,000 a year. Given his age and life expectancy, the overtime could increase his lifetime benefit payment by $574,000.

The question I pose now to the American taxpayer is “When will you and I have enough of this?” Seriously, why should taxpayers throughout the nation have to pay for the irresponsible liberals who don’t know how to manage a thing, let alone a city. Why should we be called upon to foot the bill for stupid people who put ignoramuses into office, who only continue to give them what is not rightfully theirs and make empty promises they cannot keep? Frankly, I’m thinking of contacting my state representatives and seeing if something cannot be done to bring a halt to federal taxes being taken from our checks to bailout reckless adolescent liberal utopians who are not only spending their people’s money, but they are then reaching across state lines to rip us off as well.