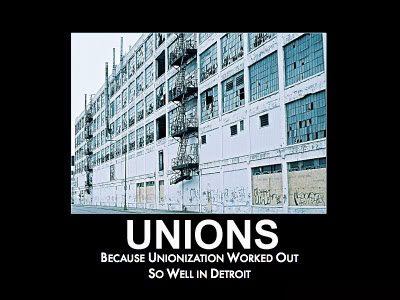 Not long ago, I was discussing the challenges with government bureaucracy, legislation, inefficiencies, and costs with an acquaintance. He said I should write an article about “what happens when all the health care workers unionize?” He didn’t say if he meant the private sector or public sector, but let’s say he meant all the government workers. It would be bad enough if every nurse, hospital janitor, and care-giving medical professional unionized in the public sector, so I will leave that for another article. Still, let’s talk about government unions and costs shall we?

Why did Detroit go bankrupt? Well, much of it has to do with legacy costs – retirement benefits and health care for already retired workers. Detroit was in a worsened pickle due to a mass exodus, job loses, economic recession and auto worker layoffs. The auto worker problem was due to unions who’d run away with the show, and Detroit city’s problem was with government worker union costs.

What about the DHS, yes, all those folks unionized too, increasing costs, meaning fewer people available for things like securing the borders and inability to fire problematic TSA workers. Who pays – well, the citizens with lousy government services, and the flying public in the case of the TSA, oh yes, and the 53% of the people who actually pay taxes as they are not getting much for their money.

Why has college tuition been raised so high? Costs associated with professor’s tenure, retirement, benefits, and health care costs, along with the high price of those beautifully expensive Taj Mahals and Sistine Chapels, and proverbial pedestals to prove the student suckers and their parents are somehow engaged in a place of wisdom – not too smart if you ask me, nor is it sustainable if you ask me.

The reality is that the IRS spends 30 to 45% of what it collects in the collection of that money, and the government spends 45% in the administration of the services it provides, so that leaves 10% to 25% left. If the government workers in the health care sector use their new union collective nature to increase their pay and benefits 35% to 45% then the government’s numbers on this project will be off by 25 to 35% at minimum – what are the chances of that happening – 100% based on just a few of the past observations with government inefficiencies, unions, and bureaucracy.

Now then, there is an interesting article I think you might like to read which appeared on the Dark Government (conspiracy theory website) titled; “Half of Obamacare Call Center Jobs will be Part Time, No Health Benefits,” which stated: “Earlier this year, Contra Costa County won the right to run a health care call center, where workers will answer questions to help implement the president’s Affordable Care Act. Area politicians called the 200-plus jobs it would bring to the region an economic coup.”

Let me tell you that the public won’t stand for that level of hypocrisy, these call centers will unionize, along with all the other government contractors in this sector, all the hospitals, HMOs, service providers, etc. – and if you think it’s bad that your health care insurance has doubled, just wait until it quadruples due to these increased costs of employee benefits, legacy costs, and government unions in the health care sector.

Lance Winslow has launched a new provocative series of eBooks on Economic Issues. Lance Winslow is a retired Founder of a Nationwide Franchise Chain, and now runs the Online Think Tank; http://www.worldthinktank.net