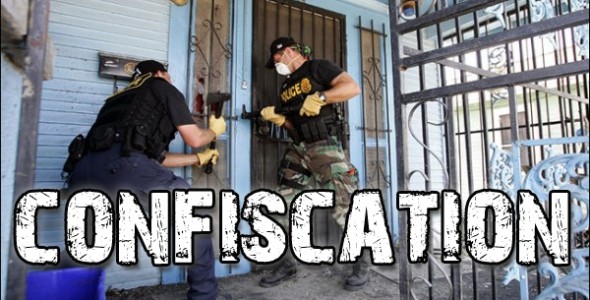 I have been writing for Freedom Outpost for nearly a year and at the former Front Porch Politics for six months before that. There was a commenter who would always come on and say that no one is coming for our guns, and yet, here we are. The evidence abounds that gun confiscation is the goal and is currently taking place. We first saw it in New York under the NY SAFE Act and then in California. Now we’re seeing it in Cook County, Illinois, former home to Barack Obama. This is why American patriots have warned against gun registration, because it inevitably leads to gun confiscation.

I reported back in July that the Illinois General Assembly shot down Governor Pat Quinn’s amendatory veto on House Bill 183, effectively allowing concealed carry in Illinois. While Quinn has vowed to continue seeking the changes he wanted, which was simply more gun control, Cook County Sheriffs teams are following through with Sheriff Tom Dart’s orders to confiscate guns:

“A new Cook County Sheriff’s team is crisscrossing the suburbs to seize guns from thousands of people whose Firearm Owner’s Identification Cards have been revoked. More than 3,000 people in Cook County have failed to surrender their revoked FOID cards to the state. Sheriff Tom Dart said he thinks many of them continue to possess firearms… Every week, the [Illinois] State Police alert the sheriff’s gun team of about 10 to 20 new revocations in Cook County. The investigators conduct a basic inquiry into the gun purchasing histories of the people they intend to contact. Then they knock on their doors.”

“The system is broken,” the sheriff told The Chicago Sun–Times. ”The system revokes cards, but the guns are of no consequence. … Our strong hope is that we will eliminate tragedies.”

Dart says there are more than 5,000 names on the gun confiscation list.

Gottlieb, who resides in Washington State, is currently collecting signatures for a measure that would require law enforcement in Washington to obtain a court order before being permitted to seize one’s firearms.  So far Gottlieb’s group has collected 160,000 signatures for a ballot initiative and hopes to gain another 165,000 by January to ensure the measure qualifies for next year’s ballot.

“We know where [the government is] going with all this: They don’t want anyone to have a firearm if they had their way,” Gottlieb added.

In addition to the registration leads to confiscation argument, Second Amendment advocates noted other concerns as well, such as the standards for which one is added to the FOID card revocation list.  In short, not every felony conviction is the same.  Should someone convicted of drunken driving or tax evasion lose their right to keep and bear arms?

“People that have committed a nonviolent crime are not a danger to the community,” argued George Mason University law Professor Joyce Lee Malcolm, “so it seems wrong to seize guns from them.”

So we are right back to the state determining the mental health of individuals and then depriving them of their ability to defend themselves with arms, in clear violation of the Second Amendment. Additionally, even the convicts, in many cases, are not violent criminals. Why should they have their firearms taken from them?

This is why there has been a warning against gun registration. It always leads to gun confiscation.