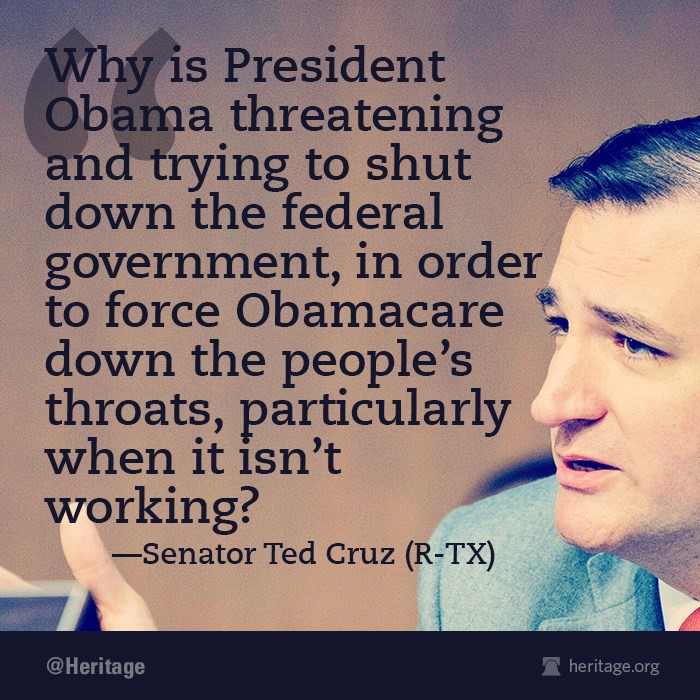 On Monday morning Senator Ted Cruz (R-TX) pointed out the obvious about Republicans in Washington; they are scared of getting beat up by the Obama administration. Cruz’ words come at a time when Senate Republicans are blasting Senator Mike Lee’s (R-UT) proposal to defund Obamacare. So Senator Cruz, instead of retreating and simply blasting back at the Republicans, took to the Glenn Beck radio show and encouraged a grassroots effort to get behind Lee’s efforts and push elected officials to support the measure. “Liberty is never safer when politicians are terrified,” the Texas senator said.

“What I can tell you is that there are a lot of Republicans in Washington who are scared, they’re scared of being beat up politically,” Cruz said during his interview with Beck.

Cruz told Beck that the Republicans in Washington are worried about Senate Majority Leader Harry Reid (D-NV) and Barack Obama screaming “at the top of their lungs” about the “evil mean nasty Republicans” who were attempting to shut the government down.

Cruz’ position was to pass a continuing resolution to fund government, but defund Obamacare. In his estimation this would put the ball in Obama’s court and demonstrate that if there was no agreement to this, then it was Obama, not Republicans who wanted to shut down government.

Frankly, it’s a smart move politically, but I would like to see further defunding of government to only the enumerate powers granted in the Constitution, which would mean elimination of various departments in the federal government, among them the Department of Energy and the Department of Education, along with the Environmental Protection Agency. These would all be good for the United States to rid itself of.

“If we stand together, that’s how we win this fight,” Cruz said.

Senator Cruz indicated that there were only 63 days for grassroots activists to convince their elected representatives to support the effort.

Cruz called for grassroots Americans to rise up against Obamacare and campaign in favor of Lee’s proposal.

“The one principal is true,” Cruz added. “I think liberty is never safer when politicians are terrified.”

Lee has threatened “every procedural mechanism,” including a filibuster to stop Obamacare.

In an appearance on Derek Hunter’s Baltimore WBAL 1090AM radio program, Senator Lee promoted his new book “Why John Roberts Was Wrong About Healthcare” and said, “The nice way to respond to it is to say is that it’s awfully convenient — awfully convenient that the law he designed, that he pushed through Congress as his signature legislative achievement is unpopular, not because it’s bad, not because the American people don’t like it, not because it’s making health care cost go up and its unfair in the way it’s being implemented — but because Republicans are criticizing it. That’s a terribly convenient response. The less charitable way of describing that assertion is that that’s absolutely ludicrous. That’s one of the dumbest arguments I have ever heard. The White House ought to be ashamed of itself for making such an assertion.”

“I’ll utilize every procedural mechanism at my disposal to do it,” Lee said. “I generally don’t signal in advance what procedural maneuvers exactly I’ll use because it’s usually not good strategy. But what I am saying is I will not vote for a continuing resolution that contains funding for further Obamacare implantation and enforcement. So far I have got, I don’t know, 13 or 14 Senate Republicans who have joined me. I think a corresponding effort is starting to be kicked off in the House. And I expect these numbers to grow steadily as Americans realize the president has said he’s not going to implement the law as written. If he’s not going to implement the law, we shouldn’t be forced to fund it.”

Lee also addressed the opposition from Republicans over the effort.

“It’s not lost on me this won’t necessarily be an easy or automatic thing,” Lee added. “But what I am saying is when voters in all 50 states starting learning moreabout this effort, start learn more about what Obamacare is and how it’s being implemented by this administration, they’re going to want to do anything they can to stop it. They are certainly going to want elected officials in Washington, as many of us who were elected specifically with the charge to stop Obamacare, to do everything in their power to stop it. This is our last chance. This is our last effort to stop it. This is the last opportunity we’re going to have to vote most likely on a continuing resolution before those Jan. 1, 2014 starting deadlines kick in. So we have to refuse to fund it now and the time for doing that is when the current continuing resolution expires on September 30.”