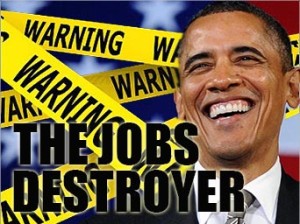 The Nazis were famous for boldly lying through their teeth and then passing off that lie as the truth.  It was a remarkable record that stood alone until 2009.  Their once impressive record has not merely been beaten but has been smashed by Barack Obama.  To believe his latest prevarication, one would only have to as Hillary once said, have to practice the suspension of disbelief.

Obama makes the absurd claim that the Keystone Pipeline would create only 2100 jobs.  Forget the rhetoric on both sides for a moment and let’s look at the raw numbers.  The pipeline would be 1179 miles long.  That’s 2100 people to manufacture the pipes, fittings, valves, and accessories, transport the pipes and fittings all along the 1179 mile route, provide food and lodging for the construction crews, and lay the pipeline.  Could it be done?  Sure if you wouldn’t mind waiting 40 years for the pipeline to be built.

TransCanada estimates that in the US alone, the construction crew would require 9,000 workers.  (That’s over four times the jobs Obama claims for you low information liberal voters)  It would take 7,000 people to manufacture 1179 miles of pipe, fittings, controls, etc  for the pipeline.  TransCanada has contracts with 50 suppliers from Nebraska to Texas to build the supplies needed for the pipeline.  Then there are the trucks needed to haul the pipes to the construction site.  The trucks have a payload capacity of 45,000 pounds.

Indeed in just the Oklahoma to Texas part of the pipeline, Trans Canada has already hired 4,000 employees and that’s just a small portion of the pipeline and only counts the construction crew.   So claiming the entire pipeline would create only 2100 jobs is pure chutzpah on Obama’s part.  He’s channeling his inner Goebbels.  And, remember, these are great paying jobs, not the McDonalds type jobs we’ve come to associate with Obama.  The average income is in excess of 50k a year.

The economic impact for the local and state governments is equally impressive.  Local governments can expect revenues of 99 million and state governments will realize revenues of 486 million and property taxes over the life of the pipeline will hit at least 5 billion dollars.  It would increase the GDP by 172 billion by 2035.  And would require 1.8 million person years of employment over the next 22 years.  And how much income tax would the federal government get from 1.8 million person years?  At a 25% rate that would come out to 180 billion.  (Based on 50,000 dollars a year with 10,000 in deductions)

In fact, Obama’s own people in the State Department have estimated the number of jobs created by the Keystone Pipeline would create 4,000 construction jobs (The amount already created in just the OK to TX pipeline) and a potential for 42,000 jobs overall.  So where did Obama get his ridiculous numbers?  A report by a strong opponent of the Keystone Pipeline, the 2011 Cornell University Global Labor Institute study.

Even the ultra friendly Washington Post, who fact checked Obama’s numbers gave him two Pinocchios for his lies. And remember that just the southern  leg of the pipeline has created double the amount of construction jobs alone that Obama claims.  And 100 additional jobs?  Oh please.  100 people to mine the ore and coal needed to refine the iron and steel, then to manufacture the parts that are sent to manufacturers to build the pipe, valves, and controls and the truckers to haul the parts to the construction site.

And what about the ancillary jobs created.  100 is not merely unbelievable but it stretches the imagination to epic heights.  The bottom line is you would have to be at least borderline insane to believe Obama on this, which is probably the best way to describe the sheeple who hang on his every word.

Let me refer back to a column I wrote, predicting events for 2013, written on March 13th of this year.

“Obama will either deny or delay the Keystone Pipeline again.”  He has actually done both. He’s delayed it until the end of 2013 and has hinted that he will add another layer of investigation before a final decision is made.  Secondly, the final word on the project has been handed to John Kerry, an opponent of the pipeline.

“Obama’s so called charm offensive is really a ploy to talk to Republicans and later when he reneges on any and all promises, he will blame Republicans for his crappy economy.  The media will lend a huge assist.”

“More democratic House members will announce their retirement as the Obama agenda and the realization that they will be relegated to the minority for 2 more years sink in.”

In fact, I suggest you read that column again and see just how accurate I was.  http://redstatements.co/my-predictions-for-2013/