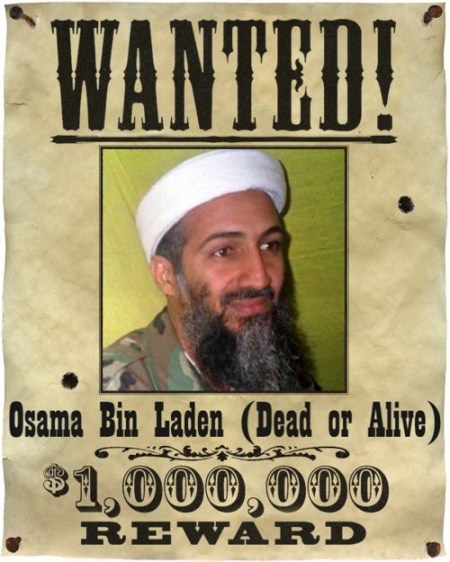 Something really really stinks about that Navy SEALS raid (and assassination) on Osama bin Laden’s compound in Abottabad, Pakistan, on May 2, 2011.

Here are three big reasons why we can’t believe the story we’ve been told.

2. The Pentagon said it had no records — not one photo, not one video, not even an e-mail — of bin Laden’s death:

A year later, in March 2012, in response to repeated (more than 20!) Freedom of Information Act (FOIA) requests by the Associated Press for files about the raid, which the AP had submitted the day after bin Laden’s supposed assassination, the Pentagon told the AP:

3. A year later, the Pentagon purged its computers of all files on the raid:

Given the Pentagon’s denial in March 2012 that it had NO, NOTHING, NADA, ZERO record of the bin Laden assassination, it is curious to say the least that on July 8, 2013, the AP reports that an order was given from a “top special operations commander” (Adm. William McRaven) to purge all military files about the Navy SEAL raid from Defense Department computers, and to send those files instead to the CIA, where they could be more easily shielded from ever being made public.

The secret move, described briefly in a draft report by the Pentagon’s inspector general, set off no alarms within the Obama administration even though itappears to have sidestepped federal rules and perhaps also the Freedom of Information Act.

An acknowledgement by Adm. William McRaven of his actions was quietly removed from the final version of an inspector general’s report published weeks ago. A spokesman for the admiral declined to comment.

The CIA, noting that the bin Laden mission was overseen by then-CIA Director Leon Panetta before he became defense secretary, said that the SEALs were effectively assigned to work temporarily for the CIA, which has presidential authority to conduct covert operations.

“Documents related to the raid were handled in a manner consistent with the fact that the operation was conducted under the direction of the CIA director,” agency spokesman Preston Golson said in an emailed statement. “Records of a CIA operation such as the (bin Laden) raid, which were created during the conduct of the operation by persons acting under the authority of the CIA Director, are CIA records.”

Golson said it is “absolutely false” that records were moved to the CIA to avoid the legal requirements of the Freedom of Information Act.

The records transfer was part of an effort by McRaven to protect the names of the personnel involved in the raid, according to the inspector general’s draft report.

But secretly moving the records allowed the Pentagon to tell The Associated Press that it couldn’t find any documents inside the Defense Department that AP had requested more than two years ago, and could represent a new strategy for the U.S. government to shield even its most sensitive activities from public scrutiny.

“Welcome to the shell game in place of open government,” said Thomas Blanton, director of the National Security Archive, a private research institute at George Washington University. “Guess which shell the records are under. If you guess the right shell, we might show them to you. It’s ridiculous.”

McRaven’s directive sent the only copies of the military’s records about its daring raid to the CIA, which has special authority to prevent the release of “operational files” in ways that can’t effectively be challenged in federal court. The Defense Department can prevent the release of its own military files, too, citing risks to national security. But that can be contested in court, and a judge can compel the Pentagon to turn over non-sensitive portions of records.

Under federal rules, transferring government records from one executive agency to another must be approved in writing by the National Archives and Records Administration. There are limited circumstances when prior approval is not required, such as when the records are moved between two components of the same executive department. The CIA and Special Operations Command are not part of the same department.

The Archives was not aware of any request from the U.S. Special Operations Command to transfer its records to the CIA, spokeswoman Miriam Kleiman said. She said it was the Archives’ understanding that the military records belonged to the CIA, so transferring them wouldn’t have required permission under U.S. rules.

Special Operations Command also is required to comply with rules established by the chairman of the Joint Chiefs of Staff that dictate how long records must be retained. Its July 2012 manual requires that records about military operations and planning are to be considered permanent and after 25 years, following a declassification review, transferred to the Archives.

Also, the Federal Records Act would not permit agencies “to purge records just on a whim,” said Dan Metcalfe, who oversaw the U.S. government’s compliance with the Freedom of Information Act as former director of the Justice Department’s Office of Information and Privacy. “I don’t think there’s an exception allowing an agency to say, `Well, we didn’t destroy it. We just deleted it here after transmitting it over there.’ High-level officials ought to know better.”

It was not immediately clear exactly which Defense Department records were purged and transferred, when it happened or under what authority, if any, they were sent to the CIA. No government agencies the AP contacted would discuss details of the transfer. The timing may be significant: The Freedom of Information Act generally applies to records under an agency’s control when a request for them is received. The AP asked for files about the mission in more than 20 separate requests, mostly submitted in May 2011 — several were sent a day after Obama announced that the world’s most wanted terrorist had been killed in a firefight. Obama has pledged to make his administration the most transparent in U.S. history.