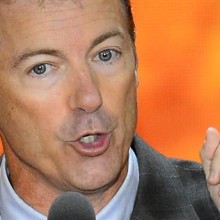 In the middle of July, Senator Rand Paul (R-KY) introduced legislation that would end US money for Egypt aid. The Kentucky Senator cited law that was already in place which should have been followed by Barack Obama when decided to continue to send funds to aid Egypt following the Egyptian military’s ousting of former President Mohammed Morsi. On Wednesday, the Senate roundly rejected a proposal to redirect aid for Egypt into bridge-building projects in the U.S. after a potential Republican presidential candidate and tea party favorite challenged the Obama administration’s refusal to label the ouster of Egypt’s president a military coup. The Senate voted 86-13 against the measure.

Paul’s amendment to next year’s transportation bill would have put a stop to $1.5 billion of American tax dollars being provided to Egypt each year, mainly for military assistance.

“Our nation’s bridges are crumbling,” said Paul, who made several attempts to cut U.S. support programs for Egypt, Libya and Pakistan and all have been rejected. “I propose that we take the billion dollars that is now being illegally given to Egypt and spend it at home.”

“The president sends billions of dollars to Egypt in the form of advanced fighter planes and tanks. Meanwhile, Detroit crumbles,” Paul noted. “Chicago is a war zone. More people will die in Chicago this year than in Afghanistan!”

Paul echoed South Carolina Republican Representative Jeff Duncan and Senator Tim Scott, who said “Stop giving money to countries that hate us, they can hate us for free.”

Paul’s own words were more of a question to Barack Obama and his colleagues in the senate. “In our hour of need in our country, why are you sending money to people that hate us?”

“All I can see is the billions of American tax dollars that he chooses to send overseas,” Paul said. “The president sends billions of dollars to Egypt in the form of advanced fighter plans and tanks while Detroit crumbles.”

RINOs were in abundance to show their support for funneling money to Egypt.

“It’s important that we send a message to Egypt that we’re not abandoning them,” Senator John McCain (R-AZ) said. Right now, Egypt is “descending into chaos. It’s going to be a threat to the United States.”

Senator Lindsey Graham (R-SC) had told reporters that holding the vote at all could send the wrong signal to Egypt. Cutting off the aid could threaten Israel’s security and U.S. counterterrorism efforts, while backing Paul’s proposal risked giving the impression that the U.S. is indifferent to the military’s actions.

McCain and Graham plan to visit Egypt next week at Obama’s request in order to push for new elections. These two senators were joined by Senators Bob Corker (R-TN) and Jim Inhofe (R-OK) in speaking out against Paul’s amendment.

Inhofe, the top Republican on the Senate Armed Services committee, said some of Paul’s points are “totally wrong” and said if the U.S. cuts aid to Egypt, the money “vacuum” will quickly be filled by other countries like Russia. Such a series of events could then harm Israel, he said.

“This is coming from a conservative, not a liberal, not a Democrat,” Inhofe said. “If you have any feelings at all for our best friends in the Middle East — that’s Israel — then you can’t consider this amendment. Israel has all the interests at stake.”

Senator Marco Rubio (R-FL) didn’t vote for Paul’s amendment either, trying to play the moderate role claiming that Egyptian aid needed to be “restructured,” not abolished.

The Obama administration said last week it would not declare Egypt’s government overthrow a coup, sort of like he wouldn’t called the Ft. Hood shooting an act of terrorism.

The Pentagon announced that it would be temporarily delaying the delivery of a new batch of F-16 fighter jets due to what has been taking place.

Every Senate Democrat voted against the amendment. “This amendment may be good politics, but it is bad policy,” said Sen. Bob Menendez (D-NJ) chairman of the Senate Foreign Relations Committee.

Earlier this year, the Senate voted against an amendment introduced by Sen. Paul that would have prohibited the U.S. government from selling F-16 military aircraft, M1 tanks, and similar military weapons to the Egyptian government.

The following are the only senators who stood up for the American taxpayer in supporting the Paul amendment: