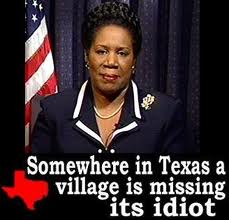 This is the same woman who during a speech on the floor of the House of Representatives, stated that Republicans were refusing to raise the debt ceiling because President Obama is Black.

This is the same woman who in July of 2010 spoke at an NAACP event and accused TEA Party members of being modern day members of the KKK.

This is the same woman who, on the floor of the House, gave her opinion that Rush Limbaugh should not be allowed to be a partial owner of a football team because of his political beliefs.

Sheila Jackson-Lee—the dumbest woman, mammal and oxygen-breathing life-form in Congress —is what happens when you mandate gerrymandering as a tool of social policy for forty years.

This is the same idiot who, during a 2005 visit to the Johnson Space Center in Houston, asked the tour guide whether the Mars Pathfinder had taken a photograph of the flag planted on Mars by Neil Armstrong in 1969.

This is the same woman who, in a speech on the floor of the House, spoke about the wars in Afghanistan and Iraq and used the example of North and South Vietnam living side by side as an example of the peace that can be achieved by withdrawing our troops and allowing the people of Iraq and Afghanistan to work out a solution.

This is the same woman who, on the floor of the House, said, “I stand here as a freed slave because this Congress came together.  Are we going to be able to do it today to free America?”

To quote Daniel Greenfield in an article he wrote about Sheila Jackson-Lee on July 26, 2011: “If there were ever a global championship for idiots, the country could send her there … and leave her there; because unlike Lassie, she wouldn’t be able find her way back on her own.”

Yes … let’s have HER in charge of Homeland Security … and who best to serve as her Assistant Secretary?  Well, that’s a no-brainer, folks.  How about another of the too-many-to-choose-from dumbed down dolts in the Congressional Black Caucus—Rep. Hank Johnson? … he who doesn’t think that Guam will tip over and capsize if 8,000 Marines are stationed there.

Hmm … I wonder if the Congressional WHITE Caucus will be recommending anyone for the DHS post.  What’s that you say?   There ISN’T a White Congressional Caucus?