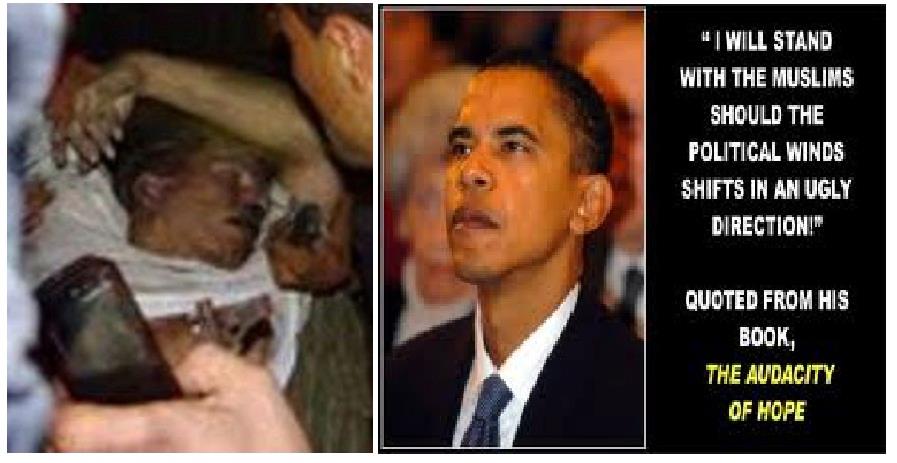 Benghazi…NO diversions, distractions, or ‘supposed’ phony scandals that are anything but, will take my focus off Benghazi. Benghazi…where four Americans were willfully, deliberately, and with malice left behind to be slaughtered, and that is indeed grounds for treason and NO one can convince me otherwise.

At the heart of Benghazi are two critical issues…first, why was Ambassador Stevens silenced (and I believe his murder was a silencing), and second, who gave the infamous order to ‘stand down’ when help could have arrived in time to save him and the others.The first issue is easy…Ambassador Christopher Stevens had to be silenced to stop him from going public with information he found out about our traitor of a president, for I believe, and have said since day one, that Barack HUSSEIN Obama was smuggling guns and weapons under the table to the Syrian rebels…rebels supported and funded by al-Qaeda. And that is a clear cut case of ‘aiding and abetting the enemy’…TREASON.

The second issue is a bit more complicated as there are two distinct sides countering each other. One side, Obama and those in his orbit including sadly some in our military, say NO order to ‘stand down’ was given. The other side, those who demand the truth be told so there can be justice for the Benghazi 4 say YES such an order was absolutely given.

I obviously belong to that second group, and as such I decided to do some research on the chain of command in relation to issuing a ‘stand down’ order. What I found could give credence to the claim by many that Barack HUSSEIN Obama did indeed issue that order, and did so to cover his illegal unconstitutional dealings with a group of the most vile of terrorists (NEVER forget 9/11) for his goal is clear as his own words say it all…”I will stand with the Muslims should the political winds shift in an ugly direction”… words from page 261 of his book, ‘The Audacity of Hope’.

Issuing a ‘stand down’ order does follow a specific chain of command, and the one relating to Benghazi would go like this, in order from top to bottom…President, Secretary of Defense, Secretary’s of the various armed services (Army, Navy, Air Force, Marines), Chairman of the Joint Chief’s of Staff, the various Chief’s of Staff for each military service, the Commanding General for AFRICOM, and the local command structure under AFRICOM.

ALL in the command chain below Obama have denied giving such an order, including then Defense Secretary Leon E. Panetta and Army Gen. Martin E. Dempsey, then chairman of the Joint Chiefs of Staff (remember, Dempsey testified that orders were given to assist in Tripoli but NOT to assist in Benghazi but NEVER telling who gave that order but we know it was NOT him). And all the military branch Chiefs have also said they gave NO such order. And while AFRICOM Commander General Carter Ham did give testimony in a closed door hearing before the House Armed Services Committee investigating Bengahzi, we still do NOT know his testimony, but know that if he had given such an order it would have been made public for all to hear for it would have cleared Obama, especially important because everything possible is being done to try and distance him from this event, especially after his nonsense about a YouTube video.

But NO such announcement assuming responsibility for that ‘stand down’ order has been made by General Ham so logic would dictate he gave NO such order. And remember, Panetta announced back in October 2012, that General Ham would be retiring for refusing to obey orders NOT to assist the US personnel in Benghazi on that fateful night, and that on Saturday, October 27th, Panetta confirmed that General Ham had indeed been ‘relieved’ of his AFRICOM command.

Now here is something interesting about the official command chain…neither the Vice-President nor the Secretary of State is in that chain. But, the Vice-President and the Secretary of State do have the authority through the President to countermand any one below the President. And while the National Security Council and the Department of Homeland Security Secretary influence military decisions (to some degree) through the National Security Act and through their advisory positions to the President, they do NOT have the authority to issue an actual ‘stand down’ order on their own as that can ONLY be done by those in the direct chain of command.

Yet according to whistleblower Gregory Hicks (the Deputy Chief of Mission in Libya at the time of Benghazi), who when testifying before Congress said that after the first attack a security team left Tripoli for Benghazi with two military personnel, and that four members of a special forces team in Tripoli wanted to go in a second wave but were ordered to ‘stand down’ (but he did NOT know who gave that order).

And remember even though many were close enough to assist and possibly save Ambassador Stevens and the others, including Rear Admiral Charles Gaouette, commander of a Navy Carrier Battle Group that was within range to help…including two Marine anti-terrorist teams based in Rota, Spain who were ready, willing, and able to help…and also including a 130-man, fully armed Marine Force-Recon unit on the ground in Sigonella, Sicily…all ready to deploy to Benghazi to help, yet all say they were told to ‘stand down’. And that ‘stand down’ order assured that Ambassador Stevens would die with Information Officer Sean Smith and ex-Navy SEALS Tyrone Woods and Glen Doherty becoming collateral damage…becoming just more ‘bumps in the road’.

And that my friends is grounds for treason for this miserable excuse of a president has blood on his hands for NOT only willfully and maliciously leaving behind the Ambassador and the others, but I believe the issuing of that ‘stand down’ order assured they would die. And who knows maybe Obama even had a hand in planning the attacks…but that is only my opinion but a pretty good educated guess I’d say, especially knowing where this man’s loyalties lie…and those loyalties are most assuredly NOT with America.

Sad…it’s all so sad and until the truth is known…until those responsible are brought to justice…Ambassador Christopher Stevens, Information Officer Sean Smith, and ex-Navy SEALS Tyrone Woods and Glen Doherty cannot Rest in Peace…and that is the added salt in the wound that is Benghazi.