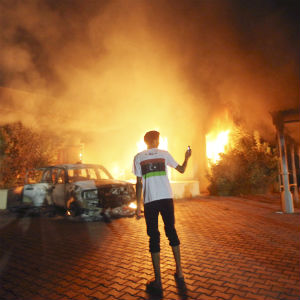 On Thursday, CNN’s Jake Tapper reported that the Central Intelligence Agency is now pressuring agents who were on the ground in Benghazi, Libya on the night of September 11, 2012 to keep silent and not talk to Congress or the media. In fact, according to the report, these CIA agents have also been put through numerous polygraph testing in order to ensure they aren’t talking about the Benghazi attacks! They were told that if they talk their career could end and that they would jeopardize themselves and their family.

The CIA allegedly had “dozens” of agency operatives on the ground at the U.S. diplomatic annex in Benghazi, Libya, during last year’s deadly terrorist attack that ended with the deaths of Ambassador Christopher Stevens and three other Americans.

Langley is taking extreme measures to mask the agency’s operations in Benghazi and in northern Libya at the time of the strike, according to CNN.

Agency employees involved with CIA operations in the country are being subjected to monthly polygraph tests, among other counterintelligence measures, an unnamed source told CNN.

“Sources now tell CNN dozens of CIA agents were on the ground that night,” Tapper reported, “and the CIA is going to great lengths to make sure whatever they were doing and what happened that night remains a secret.”

“Since January, some CIA operatives involved in the agency’s missions in Libya have been subjected to frequent, even monthly, polygraph examinations,” CNN reporter Drew Griffin said. “The goal of the questioning, according to sources, is to find out if anyone is talking to the media or Congress.”

“It’s being described as pure intimidation with the threat that any unauthorized CIA employees who leaks information could face the end of his or her career,” Griffin added.

The report a communication was referenced by a CIA source which revealed the effects of the threats against the agents.

“You don’t jeopardize yourself, you jeopardize your family as well,” an anonymous source wrote. “You have no idea the amount of pressure being brought to bear on anyone with knowledge of this operation,” another source added.

“[A] source tells CNN that 21 Americans were working in the building known as the annex, believed to be run by the agency,” a CNN.com report reads. “In the aftermath of the attack, [Rep. Frank] Wolf(R-VA) said he was contacted by people closely tied with CIA operatives and contractors who wanted to talk. Then suddenly, there was silence.”

The CIA is denying the CNN report, claiming that it has made all of its officers involved in Libya available to Congress for interviews.

“We are not aware of any CIA employee who has experienced retaliation, including any non-routine security procedures, or who has been prevented from sharing a concern with Congress about the Benghazi incident,” according to CIA spokesman Dean Boyd.

Congressman Wolf took to the House floor on Thursday and accused the CIA of running a large-scale weapons distribution operation, which was designed to move heavy weapons captured from former Libyan president Muammar Gadhafi’s arsenals to anti-Syrian forces.

“Is it possible that the president … [authorized] the weapons collected in Libya to be transferred to Syrian rebels? Was the CIA annex being used to facilitate these transfers?” Wolf asked.

“If these weapons were not being transferred to other countries like Syria, where exactly did they end up?” Wolf asked.

“Was the CIA annex being used as a logistics center to track and transfer these weapons?” he added.

The State Department told CNN on Thursday that it was simply aiding Libya to destroy captured weapons and was not engage in the transfer of weapons to foreign countries. However, it wouldn’t comment on the activities of other government agencies in the area.

Earlier this week, I reported that Congress has confirmed that they have interviewed “dozens” of Benghazi witnesses and whistleblowers. However, as far as I know there hasn’t been any mention of this kind of activity with the CIA by representatives conducting the investigation. However, Rep. Darrell Issa (R-CA) did warn the CIA about not interfering and not intimidating agents, but to allow them to retain legal counsel in the Benghazi matter.

While I can and do believe that many federal agencies don’t know what the others are doing, since I have a source close to the NSA who informed me that has been going on for years, it is amazing to hear this going on and frankly it adds to the American people’s lack of trust in the current administration. If this is true, then what we are witnessing is nothing short of soviet-style tyranny. Let impeachment begin and let the American people clean out the federal government, including the CIA.