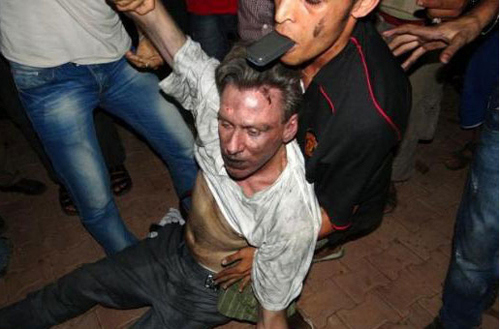 No matter how much the POS airily dismisses his many scandals as “phony,” at least one scandal — Benghazigate — will not go away but is getting ever stinkier.

None other than CNN is reporting that on the night of September 11, 2012, when four Americans — U.S. Ambassador to Libya Chris Stevens, State Department officer Sean Smith, and ex-Navy SEALS Glen Doherty and Tyrone Woods — were killed during a terrorist attack on the U.S. consulate in Benghazi, Libya,the CIA had dozens of operatives on the ground near the scene.

But the spy agency has engaged in an intimidation campaign of those agents to keep them quiet about the events of that night and why the CIA was in eastern Libya to begin with. The agents have been subjected to frequent polygraph examinations every month since January of this year, more frequent than the routine tests done every three to four years.

According to Fox News, at least 5 of those CIA spooks on the ground in Benghazi during the attack have been “told” to keep quiet:

One of CNN’s sources described the CIA’s attempts to silence its agents as “unprecedented”: “You have no idea the amount of pressure being brought to bear on anyone with knowledge of this operation.”

More than keeping those CIA agents silent, Rep. Trey Gowdy (R-SC) saysthe CIA is hiding them from the public, “changing [their] names, creating aliases,” and dispersing them around the U.S.

In other words, the Obama regime is engaged in a massive Benghazi-gate cover-up.

So why were “dozens” of CIA spooks in Benghazi that night?

Breitbart.com reports that Rep. Frank Wolf (R-VA), a sub-committee chairman of the Appropriations Committee, says “We’re getting calls from people who are close to people who were [in Benghazi at the time] that they [CIA] were moving guns [to Syrian rebels]. So where are the guns?” Wolf also wonders what Ambassador Chris Stevens was actually doing in Benghazi on that night: “Nobody knows, so I think there are so many questions from the failure to respond to where the guns went.”

Wolf is currently attempting to create a Select Committee to investigate the Benghazi attack by launching a discharge petition from committee. He needs 218 signatures to take the issue to a vote on the floor.

Senator Rand Paul (R-KY) first asked then-Secretary of State Hillary Clinton during a congressional hearing about her knowledge of any gun running coming out of the CIA annex in January. Clinton claimed she did not know anything about the issue and referred Paul to the CIA for such questions. Clinton also callously dismissed the deaths of Amb. Stephens and the other three Americans as old news: “What does it matter?”

Additionally, members of Congress’s Super Eight, (consisting of both parties’ leaders in both chambers, along with House and Senate Select Intelligence committee chairs and ranking members) would have been required to have been briefed on such gun running activity. Five of the eight members have either said they knew nothing about any gunrunning that was happening in Benghazi or claimed the issue cannot be spoken about because it is classified.