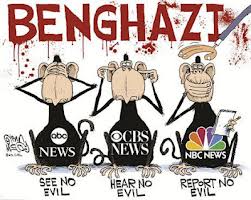 Remember that phony scandal called Benghazi?  I certainly do, and it is far from phony not only in my eyes and view but a substantial part of America.  What strikes me as funny is that the Obama Administration who insists there is nothing to see here has been taking extra steps that all secrets remain behind the curtain.  Back to Kansas Toto, this Land of Oz is totally whacked!

Today I was shocked that the liberal media has finally woke up, realizing this so called phony scandal is something far more nefarious, an out and out cover-up and the events during the murders were only the tip of the iceberg.  The world of the liberal media is shaking off the reality of their epiphany that the so called phony scandal is actually a well devised cover-up of illegal and treasonous acts of gun trafficking to our very enemies the al Qaeda rebels to arm Syrian fighting forces.

We expect coverage on Fox News who has stood alone with only citizen media keeping the story alive such as Lady Patriots, but as of today we are joined by such liberal leaning media as The Atlantic, CNN, Huffington Post, RT News, Daily Mail UK, and Telegraph UK.  Headlines and wires are buzzing as the facts or actually the cover up of facts is causing doubts as to the true intentions of the White House Administration.

“You have no idea the amount of pressure being brought to bear on anyone with knowledge of this operation,” an unnamed source told CNN.

According to recently released reports, the Central Intelligence Agency operatives who were on the ground during the attacks at the American Consul in Benghazi are being subjected to harassment, polygraph tests and additional nondisclosure agreements to insure their silence.  The September 11, 2011 attack that was responsible for the violent murders of not only Ambassador Christopher Stevens, Sean Smith, but also two of our finest, Navy Seals Glen Doherty and Tyrone Woods on the American Consul in Benghazi, has been brushed under the current administration, namely Obama himself with Jay Carney parroting the same comments that the murders are phony scandals.

“I think it is a form of a cover-up, and I think it’s an attempt to push it under the rug, and I think the American people are feeling the same way,” US. Rep. Frank Wolf (R-Va.) said.

According to the Daily Mail, some of the agents have been ordered to take multiple polygraph tests since January, and for some it has been a monthly ordeal.  According to Fox News Fox News has learned that at least five CIA employees were forced to sign additional nondisclosure agreements this past spring in the wake of the Benghazi attack. These employees had already signed such agreements before the attack but were made to sign new agreements aimed at discouraging survivors from leaking their stories to the media or anyone else

When one inside source said that the CIA is trying to find out if any of its agents are talking to media or members of Congress at Benghazi.  The source went on to say that doing so would be risky and have far reaching consequences, “You don’t jeopardize yourself, you jeopardize your family as well,” the source said.

I ask for all of those who have been demanding accountability and answers to be made for this obvious dereliction of duty and high treason by aiding and abetting the enemy, to never give up until we are finally heard.  It is not an easy job, and it wears many down, hoping for the facts to be presented and the likes of Hillary “What difference does it make?” Clinton, and Barrack “If the winds change, I will stand with my Muslims brothers” Obama, be brought to trial to pay for their crimes.

CIA spokesperson, Dean Boyd denies the allegations that the agency or administration is covering anything up.  He claims that CIA employees are always welcome to speak to members of Congress, and that the agency has shared “an extraordinary amount of information related to the attack on US facilities in Benghazi.”

“CIA employees are always free to speak to Congress if they want,” he said in a statement reported by The Daily Mail. “We are not aware of any CIA employee who has experienced retaliation, including any non-routine security procedures, or who has been prevented from sharing a concern with Congress about the Benghazi incident.”

Doubts on the honesty and integrity of this statement is becoming prevalent with the news agencies as they ponder statements by U.S. Rep Wolf who says the information leaks present a different narrative and unanswered questions as to the number of Americans and CIA operatives who were at the scene at the time.  According to Wolf, in the days after Sept. 11, several sources with ties to the CIA demonstrated a willingness to share what they know with members of Congress. But now, there is nothing but silence from CIA operatives and contractors.

“Initially they were not afraid to come forward,” he said. “They wanted the opportunity, and they wanted to be subpoenaed, because if you’re subpoenaed, it sort of protects you, you’re forced to come before Congress. Now that’s all changed.”

Headlining the Huffington Post, Questioning a CIA Cover-up on the events in Benghazi, even citing government emails revealed in May that the previously unknown extended role of former CIA director David Petraeus in shaping the White House’s post-attack talking points, which both the White House and the CIA have frequently denied.

I think the biggest revelation that the liberal media is now looking at is what “WE” have suspicioned and known all along, The entire Benghazi operation was a cover for an illegal gun trading swap with Al Qaeda operatives to supply arms to the Syrian rebels through the middle man “Turkey”.

I have stated this for nearly a year my suspects which are coming to reality, that the gun running of arms to terrorists was an ongoing practice that would make Fast and Furious look like child’s play.

The Ambassador of Turkey had a meeting 40 minutes before the attack on the consul, leaving totally unharmed and uninhibited by the watching eyes of the so called rebels.  They were not about to attack one of their own.  Remember that is against their teachings to kill their own.  As many suspect some element of the meeting went unanswered.  Was it that they were unhappy about the recent cargo ship smuggling in illegally American arms was detained and confiscated after leaving Turkey?  Or maybe it was a trade in silence for the Blind Sheik?  Maybe it was because they wanted stronger and more weaponry such as the anti-aircraft missiles and were delayed or told no.  It could be a number of things.  We already knew that the man-packs that were supplied to the rebels/radicals in Libya were making their way into the hands of terrorists.

I have to say the Atlantic; one of the staunchest critics of all things conservative shocked me on today’s headlines. The Attack in Benghazi: Worth Investigating After All

CNN reports that dozens of CIA agents were on the ground there — and that they’re being pressured to keep quiet. Why?

The Atlantic actually stretched its neck out to admit and question the entire cover-up, not only the events of the night of September 11, 2011, but the reasons the CIA had such an extensive operation there in the first place.

As the writer for the Atlantic states his reaction when he ever heard the word “Benghazi” was to tone it out.  Thinking it was just a grand stand podium that staunch republicans were using for speaking points for the election and a venting post for the after effects of a failed campaign.

But then the author Coner Friedersdorf wrote: With House Republicans and talented national-security journalists covering the story even after the election, and nothing to add myself, I tuned out every time I heard the word “Benghazi” on the news. But in May I briefly tuned back in, because it turned out that the Benghazi outpost wasn’t a “diplomatic outpost.” Why were so many journalists ignoring the fact that it was largely a CIA operation?

“I don’t know what happened in Benghazi. But knowing that the U.S. facility was a CIA post would seem to help explain certain mysteries. Why wasn’t the Obama Administration truthful about what happened? There may have been multiple reasons. Surely one of them was that they wanted to hide the fact that a supposed diplomatic facility was really rife with spies.

Why was the compound attacked? It seems likely that the presence of more than 20 CIA agents had something to do with it. Why were bureaucrats at the State Department so insistent on deflecting blame? Perhaps they’re just typically averse to seeing their misjudgments revealed. But it also seems plausible that they conceived of Benghazi as a CIA operation, given the fact that it was largely a CIA operation, and felt the CIA bore responsibility for protecting their own assets, a rebuttal State Department officials cannot make publicly so long as we persist with the fiction that Benghazi was just a normal diplomatic facility with foreign service folks, a visiting ambassador, and no overwhelming spy presence.

Did an American ambassador die in Benghazi in part because the Obama Administration, like all its executive branch predecessors, decided to use diplomatic cover to protect covert CIA assets? What, exactly, were those CIA agents doing in Benghazi? These are the sorts of questions neither establishment Republicans nor establishment Democrats have an interest in answering.”

“CNN has uncovered exclusive new information about what is allegedly happening at the CIA, in the wake of the deadly Benghazi terror attack. Four Americans, including Ambassador Christopher Stevens, were killed in the assault by armed militants last September 11 in eastern Libya. Sources now tell CNN dozens of people working for the CIA were on the ground that night, and that the agency is going to great lengths to make sure whatever it was doing, remains a secret. CNN has learned the CIA is involved in what one source calls an unprecedented attempt to keep the spy agency’s Benghazi secrets from ever leaking out.”

“Speculation on Capitol Hill has included the possibility the U.S. agencies operating in Benghazi were secretly helping to move surface-to-air missiles out of Libya, through Turkey, and into the hands of Syrian rebels.”

I think revelations and actual first real reporting by many of the left leaning media needs to be pushed farther to keep this going.

They are finally starting to question their POTUS on high. When they admit or at least question that the CIA was secretly funneling Libyan weapons to Syria, long before Congress “lifted its hurdles” on arming Syrian rebels, we are making headway.

They acknowledge that the CIA is at minimum trying to hide something huge from Congress, something that CIA agents might otherwise want to reveal, and in itself is a reason for Congress to press hard for information. And if speculation about moving weapons is grounded in anything substantive that would be an additional reason to investigate what the CIA is doing in Libya. Dozens of CIA agents were apparently on the ground in Benghazi, Libya last September.

What I want to know is why!

This article first appeared on Lady Patriots. Julia Sieben is Co-Editor of Lady Patriots and a regular guest contributor to The D.C. Clothesline.