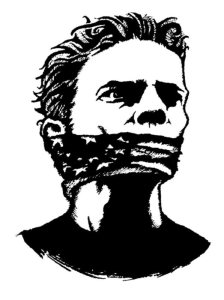 Are you still under the delusion that there is freedom of speech and freedom of the press in Amerika?

Take your jobs plan and shove it, Mr. President: Your policies have harmed Chattanooga enough.

Jeff Poor reports for the Daily Caller, Aug. 1, 2013, that the headline greeted the POS when he visited Chattanooga, Tenn. earlier this week, as part of his PR blitz on the supposed “recovering” economy.

Welcome to Chattanooga, one of hundreds of cities throughout this great nation struggling to succeed in spite of your foolish policies that limit job creation, stifle economic growth and suffocate the entrepreneurial spirit. Forgive us if you are not greeted with the same level of Southern hospitality that our area usually bestows on its distinguished guests. You see, we understand you are in town to share your umpteenth different job creation plan during your time in office. If it works as well as your other job creation programs, then thanks, but no thanks. We’d prefer you keep it to yourself.

In a story published on Thursday, the Chattanooga Times Free Press announced the firing of editor Drew Johnson and called his headline “inappropriate”:

The headline was inappropriate for this newspaper. It was not the original headline approved for publication, and Johnson violated the normal editing process when he changed the headline. The newspaper’s decision to terminate Johnson had nothing to do with the content of the editorial, which criticized the president’s job creation ideas and Chattanooga’s Smart Grid. The Free Press page has often printed editorials critical of the president and his policies.

If you go to the Chattanooga Times Free Press editorial now, you’ll see this headline instead:

In effect, Mr. Johnson was fired for these “inappropriate” words:

Take your jobs plan and shove it, Mr. President.

I wonder what Obama’s NSA has on Jason Taylor?