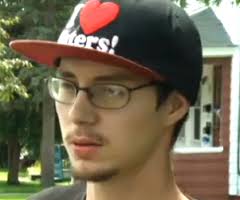 Joshua Severance was seemingly minding his own business en route to his father’s house when he spotted a police cruiser. Severance happened to be carrying a 9mm semi-automatic handgun that was clipped to his belt and very much legal in Vermont. The gun was not concealed because it was hot and Severance had removed his shirt. But in Vermont open carry is perfectly legal.

Milton resident Joshua Severance says he was visiting his father in Rutland City and it seemed like a typical Monday. The 26-year-old was walking down Summer Street to get to his father’s apartment.

“There was a cruiser sitting there parked, and it saw me. I had my firearm on my side, had my shirt off because I was hot, minding my own business just walking along, cops saw me,” Severance said.

While the police ran background checks, the National Guard veteran says he felt disappointed at the way he was being treated.

“I can see pulling somebody over and asking them to look at the firearm or check the serial number to see if it comes back stolen, but putting somebody in handcuffs and throwing them in a cruiser and treating them like a criminal from square one– I don’t agree with,” Severance said.

“In this particular neighborhood it is not commonplace to have people walking down the street with firearms, either rifles, shotguns or handguns. It was suspicious; it was out of the ordinary,” Rutland City Police Sgt. John Sly said.

Sly says Severance was not breaking the law, and in Vermont, gun owners can legally carry a firearm, concealed or not.

“The officer asked me why I was carrying it and I said it was because I could. It was my right to,” Severance said. “And he said, ‘Do you know there was a shooting here the other night?’ To which I said, ‘No, I didn’t– but what’s that have to do with me?'”

Police say these types of stops are not out of the ordinary and are routinely conducted. They remain firm that given the circumstances, it was appropriate protocol.

There had been recent shootings in the area and the police seem to think that this justifies their treatment of the situation. Here is a short video that goes into more detail:

OK, the obvious question on my mind would be this… Can the police handcuff you and not make an arrest? That is a good question and it would certainly depend on who you ask as for their interpretation of the law. However, former police detective Terry Ingram talks about this extensively in a video and says that the police have no right to handcuff and then release you. He claims that it is a clear violation of the 4th amendment.

Ingram is very clear that fear for the officer’s safety is “irrelevant” and his interpretation of the law is that those cuffs can not go on until an officer is ready to make an arrest. The exceptions he speaks of are those where an arrest was made erroneously (bad intelligence). No one seems to have “ratted” this young veteran out and thus the handcuffs should have never gone on.

It seems to me like a clear violation of Severance’s 4th Amendment rights.