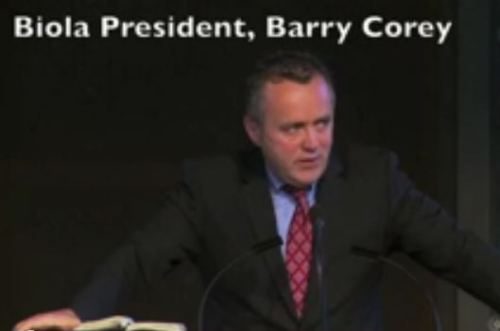 On its website, the university identifies itself as providing “Biblically Centered Education.” Its 2012-2022 motto, as proclaimed by university president Barry Corey is “A Soul of Conviction, a Voice of Courage.”

In May 2013, Diana Jimenez, a Nursing student at BU, asked the university for permission to display pro-life signs on campus, including this poster, showing the results of abortion:

The university administration first sent Dean of Students Danny Paschall to “talk” to Jimenez. Not surprisingly, Paschall denied her request.

But, compelled by her conscience and invoking her Constitutional right to freedom of speech, Jimenez went ahead and displayed the poster of the aborted  babies.

BU’s Chief of Campus Security John Ojeisekhoba tore the poster from her hands. He also pompously forbade the video-taping of the incident and threatened “legal action” if the video is posted to “any site.”

Then Ojeisekhoba threatened to “kick” Jimenez “off the campus” if she “acts the same way” by showing pro-life signs in the future. Being “kicked off campus” will mean she’s expelled from the university and “can’t graduate.” He’ll even sic “the sheriff” on her.

Although Biola University did not expel Jimenez, she is being punished. Her professors are instructed to refuse her requests for letters of recommendation, which is a death knell to her professional future as a nurse.

BU President Barry Corey can be contacted only through his executive assistant Michele Huges:

Director of Nursing Susan Elliott can only be contacted via the Nursing Department’s phone number  (562) 903-4850.