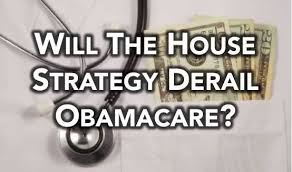 With the recent and ongoing scandals of the Internal Revenue Service that have been in the media recently, it’s caused many Americans even more concern that this agency would be the one enforcing the Affordable Care Act, aka Obamacare. It’s not that we weren’t concerned about the agency to begin with as it seems it has nothing but a tyrannical history behind it. However, the House of Representatives passed HR 2009, the Keep the IRS Off your Health Care Act of 2013, on Friday with a vote of 228-185 with four Democrats crossing the aisle to vote in favor of the resolution.

HR 2009, sponsored by U.S. Rep. Tom Price (R-Georgia), and it prohibits the IRS from having any role in the enforcement of ObamaCare. Price said, who is a physician, said:

“By voting to prohibit the IRS from implementing or enforcing any part of President Obama’s health care law, the House of Representatives has taken an important step toward protecting the health care of American citizens today. The Keep the IRS Off Your Health Care Act has the support of over 140 cosponsors in the House and has been endorsed by numerous organizations and thousands of Americans who share our commitment to preventing any of our fellow citizens from having to answer to the IRS when it comes to their personal health care decisions.

The IRS clearly has not been able to prudently and impartially enforce current tax laws. It has abused its authority by targeting individuals and organizations. There’s no reason to trust this massive agency with one of the most personal aspects of our lives – our health care.

Instead, we ought to be empowering individuals and families to make their own health care decisions. There are many positive ways to pursue a patient-centered health care system. But to get there, we need the Obama Administration and Senate Democrats to stop siding with the Washington bureaucracy and to start standing up for the rights and health care choices of the American people.”

The Act’s purpose is “To prohibit the Secretary of the Treasury from enforcing the Patient Protection and Affordable Care Act and the Health Care and Education Reconciliation Act of 2010.”

The House Resolution lists four reasons for the resolution.

(1) On May 10, 2013, the Internal Revenue Service admitted that it singled out advocacy groups, based on ideology, seeking tax-exempt status.

(3) This action could be an indication of future Internal Revenue Service abuses in relation to Public Law 111-148 and Public Law 111-152 given that it is their responsibility to enforce a key provision, the individual mandate.

(4) Americans accept the principle that patients, families, and doctors should be making medical decisions, not the Federal Government.

The resolution states that “The Secretary of the Treasury, or any delegate of the Secretary, shall not implement or enforce any provisions of or amendments made by Public Law 111-148 or 111-152.” In other words they will not be able to enforce PPACA (Patient Protection and Affordable Care Act) and HCERA (Health Care and Education Reconciliation Act).

Though the House has tried more than forty times to repeal Obamacare, this is not what this resolution is. It is more of an attempt to get around it.

Barack Obama has threatened to veto the bill but chances are, that won’t be necessary. The Democrats hold a slim majority in the Senate and are not likely to approve any variation on the bill, although two versions have been introduced in the Senate over the past few months.

Congressman Darrell Issa (R-CA) wrote, “ObamaCare is a train wreck for American individuals, families and businesses. We now know that the health care law implements a massive tax on the American people and raids Medicare as a main source of funding, health care insurance premiums have sky rocketed since its passage and its implementation has been so disorganized that the President has had to delay key provisions of the legislation.”

“And now, President Obama wants you to further answer to the Internal Revenue Service which has violated your trust and forfeited its claim to a reputation of fairness and impartiality,” Issa wrote. “The IRS has also requested $439 million in new spending to hire nearly 2,000 new agents just to implement the unpopular health care law.”

Issa laid out many problems with the IRS that has come before his committee.

“The facts speak for themselves – ObamaCare has been and will continue to be a disaster impacting every American. I am committed to dismantling, defunding and repealing ObamaCare so that American families, individuals and businesses have the freedom to choose quality, affordable health care that meets their individual needs.”