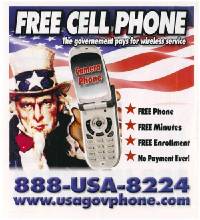 Jillian Melchior writes for The National Review. In a recent op-ed and various interviews she has been telling a story which reveals huge corporate greed and questionable ethics that are behind the “Obama Phone” debacle.

In an interview on The Steve Malzberg Show, Melchior revealed that despite having an income that was far in excess of the qualification threshold, she was able to obtain 3 phones. Melchior stated that with her income she could support a family of 8. The maximum income to qualify for one of these phones is supposed to be no more than 136% of the current poverty level. She obviously makes well in excess of that amount.

She was also able to obtain three phones despite the program being limited to one per household.  Melchior also talked about the huge corporate welfare system that is in place and the large windfall of profits going to TracFone. Here is the interview:

Does it tick you off just a little that we are all paying $2.50 a month to fund this program? It did me. People with jobs and families sometimes have to make tough decisions. I use Straight Talk from Wal Mart. I use the no contract, $30 per month option. I am not the only person in America who has had to go without a phone for a couple of days because diapers and formula were more important. A lot of WORKING people can relate to that.

After hearing Jillian’s comments about Carlos Slim and the American tax dollars being funneled to a Mexican billionaire, I had to go read the article at Politico. Here are the numbers that she mentioned:

TracFone, the largest prepaid wireless company in the United States, is a subsidiary of Mexican telecom giant América Móvil. It numbers more than 20 million subscribers and says 3.6 million make use of Lifeline.

Phone providers get $9.25 a month per customer. TracFone receives up to a quarter of the federal program’s funds, amassing $451.7 million in support payments in 2011. The company stands to benefit more from a plan to expand Lifeline through broadband service.

I must admit that I couldn’t help but think of Ross Perot and his “giant sucking sound” rants. I realize we live in a global economy and we aren’t necessarily sending $451.7 million to Carlos Slim directly and his company does provide jobs in the States.

But if there is one thing I do know about Obama… He would if he could. He’d just write a check directly to Carlos and leave the American workers out of it if he could. That’s my opinion of course but I believe that our president hates America.

It is what it is.

In the mean time, go get a few Obama Phones. Why stop at three? Everyone else is doing it. I will leave you today with another Jillian Melchior appearance on the John Batchelor Show.

Wake up America. You have been sold out and it gets worse every single day.