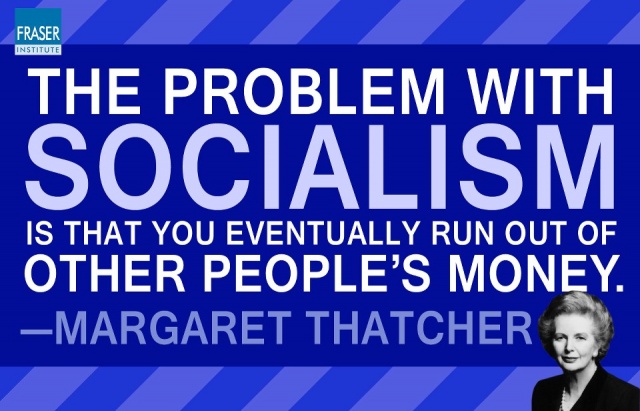 “The American people will never knowingly adopt socialism. But, under the name of ‘liberalism,’ they will adopt every fragment of the socialist program, until one day America will be a socialist nation, without knowing how it happened.” He went on to say: “I no longer need to run as a Presidential Candidate for the Socialist Party. The Democratic Party has adopted our platform.”

Thomas died in 1968 having only partly achieved his dream of a socialist America.  But he got close.  With Roosevelt and Truman, Thomas must have been elated.  Then, after brief disappointment with eight years of a very successful conservative Eisenhower, his dream came alive again with Kennedy and Johnson. Thomas may have seen how, during their campaigns, Nixon proved himself slightly to the left of John Kennedy, and, when he died on the eve of Nixon’s inauguration, it is not inconceivable that he believed his dream would actually live on. Liberalism had become, by then, an ingrained concept in the American consciousness.

How right he was.  Nixon, a rank politician with his own self-interest at the center of his agenda, was no conservative. In fact, supported by big-mouthed liberals like Daniel Patrick Moynihan, he outspent his predecessor, Lyndon Johnson, on social programs.  Gerald Ford, who said that Poland was NOT under Soviet domination, was at best a nonentity, and at worst, a complete joke, who presented no worry for Thomas’s aggressive dream. And when the egotistically idiotic Jimmy Carter drove us into double digit inflation with his socialist Democratic Party policies, Thomas must have smiled in his grave.  If he could have risen from it, he’d have danced a jig.

Adopting a conservative stance, the pro-big-business Ronald Reagan, whom conservatives so admire and whose intentions were sincere and honorable for America, nonetheless, set the tone for a huge expansion of government spending, in collusion with big businesss.  Ultimately, whether or not it was his wish, Reagan gave us the default of big government in perpetuity.

Thomas would have hated Reagan, of course, for creating of a new class of Americans, the Billionaires, only a few of whom even existed on the planet before Reagan, but who after him replaced the dream of ambitious men to become Millionaires.  Nowadays, the term Millionaire is a status for also-ran rich people, mere pikers by comparison with Bill Gates, et al., but a status few of us can ever hope to achieve. Reagan also gave us the age of the Corporate Raiders, whose false form of capitalism handed on a silver platter the Liberals’ golden opportunity to defame the rest of the decent capitalists whose businesses, big AND small, built the wealth of this nation and made the standard of living for all working people not merely comfortable but enviable.

Norman Thomas might have despised big businessmen, but he would have adored the opportunity to point to “proofs” of the evils of capitalism at its worst.  Reagan’s defenders point to the enormous spurt in the growth of wealth during his eight years in office, but there was a downside.  Some working people did well during the 80s, but in reality, while the super-rich got super-richer, the wealth of the middle class, meanwhile, stagnated.  Thus, in very practical terms, the rest of us seem to have gotten measurably poorer as a class.

Although Reagan was a social conservative, God-fearing and traditional in his values, in the economic world, which leads ultimately and inevitably to those in power, he was an outright hero, even among the Democrats, who like wealth as much as anybody does, despite what they say publicly about “the Rich.” In public, they may have made a laughing stock of Reagan, but they all invested and cultivated their private greed which, was unequaled by previous generations.

Thus, whatever praise is heaped upon him by Rush Limbaugh and other conservative defenders, the alarming truth is that Reagan eventually gave us not only George H. W. Bush but Bill Clinton who, had it not been for the warrior Newt Gingrich and his 1994 conquest of both houses of Congress, would have been unfettered in leading his cohorts toward historically unprecedented levels of corruption and spoils. Alas, Gingrich was cut down by forces who sought to reinstate the potential for the corrupt status quo – and they were all Republicans.  Bob Dole dismembered the original Contract with America and ultimately won for the Democrats the reinstatement of Norman Thomas’s pickpocketing strategy, although he did so in the fictitious name of political moderation and compromise.

After the alarm Clinton raised in Middle America, they sought someone who could put the brakes to the Liberals’ pickpocketing of our rights. George W. Bush, whose abysmal lack of wit and ubiquitous stream of malaprops that embarrassed everyone but him, supported and even strengthened the sodden leadership of the Republican establishment, and thus continued to build Thomas’s dream. Although he did so unwittingly, those surrounding him were not so clueless of the advantages presented by creeping socialism.

Harry Truman famously said that if given the choice between a real Republican and a fake one, the voters would pick the real one every time. Well, that maxim is as easily applied in another direction and has been proven correct.  When given the choice between a fake Democrat (or RINO) and a REAL Democrat, they picked the real one. They elected Barack Obama, and they did it TWICE!

The American voters’ failure to elect a real conservative to the White House, one who would vigorously and uncompromisingly restore the foundations of our republic, has left that great foundation not merely in disrepair, but in the progressive stages of crumbling decay. Collapse is not far off.  A republic, as Franklin warned, needs keeping.

Norman Thomas’s dream may not be complete as yet, but it is certainly alive and well. It would do us well to realize that Thomas’s dream of socialism, still being fed to us under the name of ‘liberalism,’ has come about through the policies of every president and administration since Franklin Roosevelt’s.  If we do not reverse that course in a massive and immediate change of direction, we will, as Norman Thomas promised, have adopted “… every fragment of the socialist program, until one day America will be a socialist nation, without knowing how it happened.”