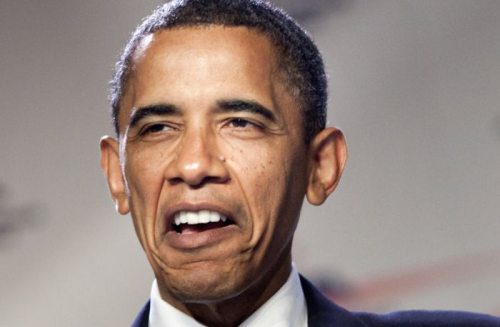 During an August 4th, Sunday afternoon segment of Political Insiders on Fox News, Fox News Analyst & contributor Pat Caddell levied a serious allegation against Republican House Speaker John Boehner in relation to these ever multiplying developments centering around Obama’s ongoing Benghazi scandal. Caddell stated outright during an impassioned dialogue, that Boehner himself has known the details of Obama’s massive intimidation campaign against CIA survivors of the notorious September 11th, 2012 terrorist attack of our U.S. Embassy in Libya by Islamic extremists with links to al-Qaeda. Not just known, but Caddell went so far as to assert that Boehner himself has made concerted efforts towards suppressing information about this campaign which exploded into the national media spotlight with the recent CNN expose revealing the debauchery of this clandestine undertaking.

Pat Caddell isn’t the only person however who has attributed dubious motives for the House Speakers reluctance for so long to delve into this matter.

If Boehner has cut some sort of deal with Obama as Levin suggests to help stonewall a select committe investigation (as has been proposed by Rep. Frank Wolf- Republican of Virginia), what could Boehner’s motivation for this possibly be? We know the running of weapons & surface to air missiles is most probably the chewy core of Obama’s Tootsie Roll Tootsie Pop he does NOT want Mr. Owl figuring out how many licks it’s going to take to get to the center of. So going on that presumption, has Obama perhaps deployed his IRS goon squad to coerce Boehner’s cooperation to keep his secret a secret? I’ve heard rumors insinuating this same tactic was used in compelling Supreme Court Chief Justice John Roberts stunning support to uphold Obama’s Patient Protection & Affordable Care Act when it went before the Supreme Court in March of 2012. But whatever the facts of the matter may be, I just know I don’t put anything past this narcissistic delinquent.

If the substance of the allegations being reported about this intimidation campaign against these Benghazi survivors are true (& personally I think they are), these threats aren’t simply being directed at the survivors but extend beyond to include their families as well. What do you even say to that?! As if that weren’t enough, we have the Obama administration spreading them out around the country in undisclosed locations & under assumed identities. Then we’re expected to believe all these scandals are PHONY??! It doesn’t just strain incredulity, it ruptures its guts out all over the deck in a steaming bloody pile.

This whole wretched dictatorship aristocracy some of you might still refer to as our “government” has become a predatory nightmare to the dream our Founders envisioned for their fledgling nation they gave everything to make possible. Those venerable patriarch’s whom so many of these Progressive puritans today regard with pathological ridicule & contempt. Referring to them in their terminal ignorance as obsolete & outdated, yet what do these degenerates provide or offer as an alternative in their own turn? They manifest nothing but depravity, hypocrisy, irrationality, & immorality. Everything they touch is diminished, but when you look at those in politics whom these walking dead elect to represent them, is it any wonder?? Anything you could loosely apply the term “human” to that supports a worm like Hillary Clinton, or a deviant like Anthony Weiner is beyond absolution.

Speaking of Hillary Clinton…Its been announced that she’ll be the recipient of The 2013 Liberty Medal here on September 10th. Jeb Bush will be officiating over the ceremony & presenting her with this prestigious honor himself. It’s no secret she has her sights set on 2016. I don’t even want to live on this planet anymore… 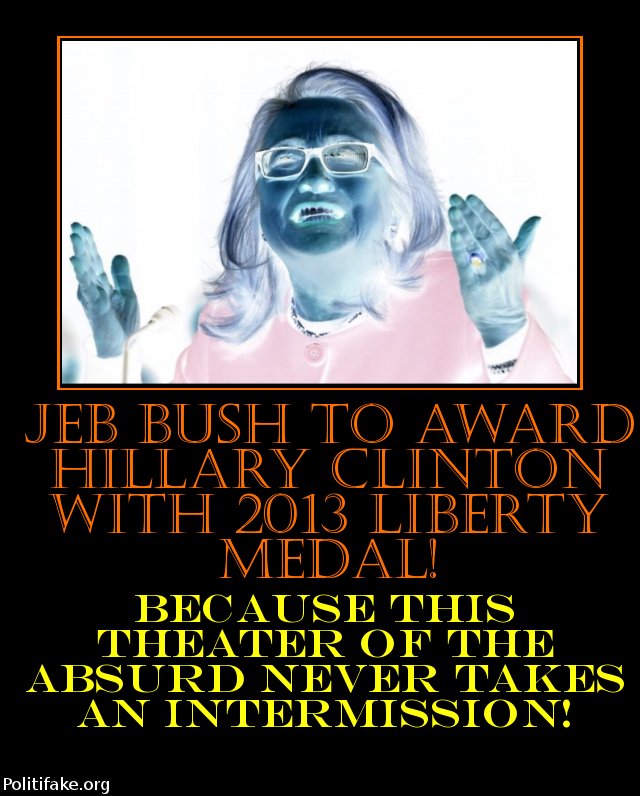