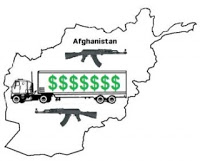 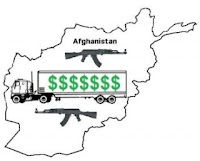 Hey, they don’t need to try and retake it…Obama and crew are literally handing Afghanistan back over to them.

And the ghosts of Benghazi hover over this as remember, al-Qaeda supporters had some of the contracts to guard our embassy compound and look how that turned out. Benghazi…through which I’ve said since day one that I believe Obama was running guns and weapons…US military grade guns and weapons…’under the table’ to the al-Qaeda backed and supported Syrian rebels.

Something is very wrong here…Benghazi and now Afghanistan…paramount to treason I’d say and again Congress looks away and does NOTHING…the cowards.

By claiming terminating these contracts (in fact 43 contracts with militant connections) would constitute a ‘due process rights’ violation if they were terminated based on divulged classified information or on findings by the Department of Commerce allows the contracts to keep getting awarded to the enemy…and why…because according to our rule of law NOT enough evidence exists to start suspension and debarment under federal acquisition regulations just based on the fact that al-Qaeda and the Taliban are designated enemies.

Doing business with the enemy…how far we’ve fallen under this president.

But what’s even worse than the awarding of these contracts itself is the fact that this administration is giving the enemy protection under our US laws. Who cares about the enemy’s ‘due process rights’…who gives a damn what the enemy thinks about how we award our contracts…who cares…only enemies of America who side with the enemy care…only the enemies within care…only Barack HUSSEIN Obama and his minions care.

And so we taxpayers are footing the bill for billions of dollars in reconstruction monies at the same time our troops are being withdrawn from Afghanistan (and I wonder who will oversee these monies once we have completely withdrawn…hmmm…)…$10.7 billion for fiscal year 2014 alone to cover such things as improving local governments to building roads and schools (our dollars being given to local governments being infiltrated by the Taliban and schools teaching hatred of America)…$30 billion for contracts to build, train and sustain the totally useless Afghan army…$47 million on a contracted program to what is called ‘stabilize Afghanistan’ yet the Taliban and al-Qaeda, the very source of the instability, have NOT been dealt with except to give them the very contracts and monies to cause even more trouble.

And so Barack HUSSEIN Obama is actually funding America’s enemies with our taxpayer dollars funneled through military contracts…and as long as the enemy gets funding and military supplies via this administration giving them and their supporters these contracts they will indeed continue to recruit new members, continue their terrorist actions throughout the region, and continue to pose a threat to our homeland…but hey, Obama said al-Qaeda was decimated and on the run…but the thing is they’re on the run to America.

And no one in Congress does a damn thing about it…no one.